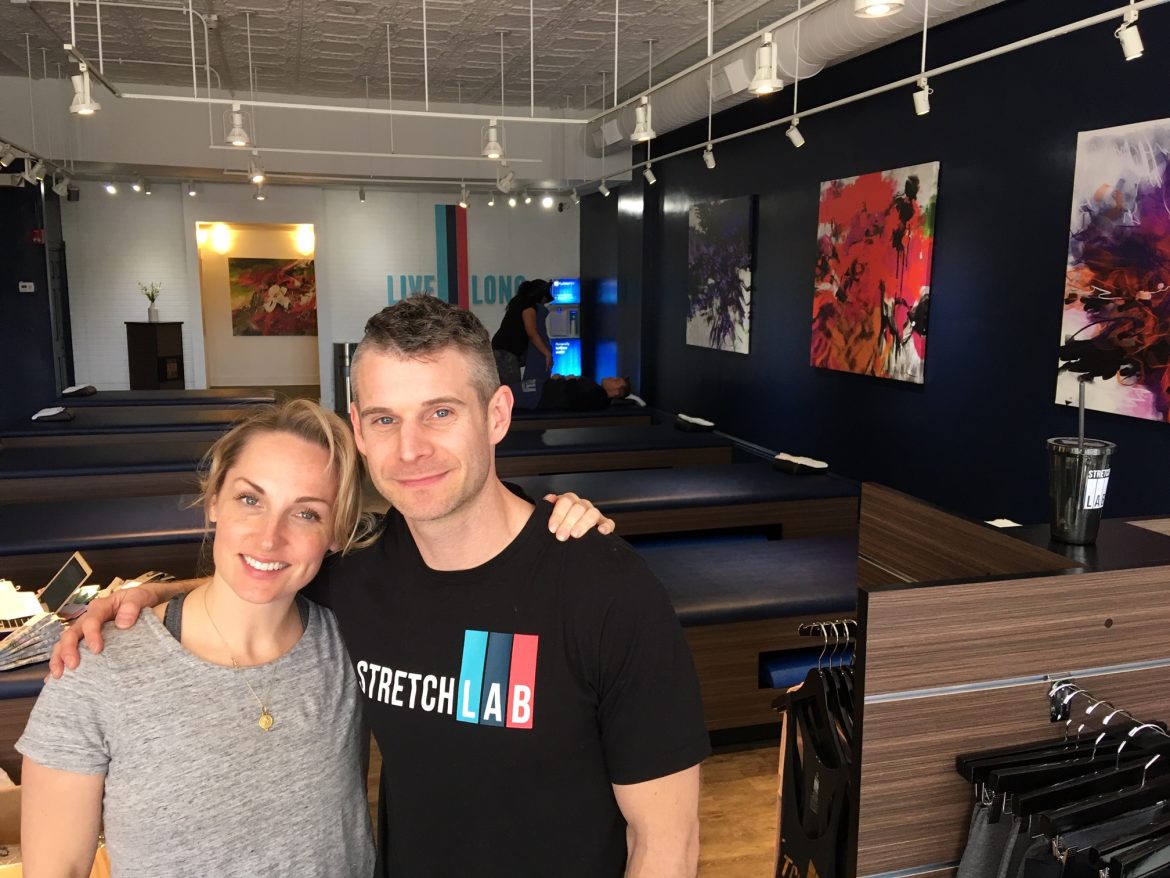 One year ago, Adam Kanzer decided to a abandon what had become an unfulfilling career in advertising that had seen him commute to New York City daily, keeping him away from his young and growing family.

Dad to two young kids in Westchester County, N.Y., Kanzer was inspired by a neighbor who had left her career in finance to launch franchises of a fitness-related business.

“So I started investigating different franchise concepts and came across this one and it just naturally struck a chord with me,” Kanzer said Thursday afternoon, sitting cross-legged on one of the stretching tables on the main floor of Stretch Lab at 86 Main St.

“I played sports my whole life. I’ve been a diligent stretcher and I was doing it long before it was a ‘thing’ to do. I definitely attribute it to the fact that I’ve always been injury free—knock on wood. So I always believed in it. So when I saw that this was actually a concept where it’s a place where that’s all they do, it just made sense.”

And it seems to make sense to a lot of New Canaanites.

“We’re pretty much full on,” the Dobbs Ferry, N.Y. resident said. “The response has been tremendous. People definitely realize that this is something they need and they understand that it’s kind of complementary to all the things they are doing in their lives. It doesn’t matter if they’re an athlete, not an athlete, active or not active—they understand the ability of this to help them with whatever it is they want to do.”

One year ago, still working in advertising in New York City, Kanzer consulted with a professional about types of franchise-model businesses that he may pursue and when he heard about Stretch Lab, he jumped on it.

“I just believed in it,” he said. “I didn’t investigate the business model or go into any of that. Just when I heard what it was, I was like you know what, that makes sense, that would work.”

Kanzer himself has been involved in sports his entire life, including playing soccer while earning a business degree in college in Binghamton, N.Y. He would go on to attend a two-year portfolio school for advertising in Miami, launching his career as a copywriter and creative director.

“So this is a pretty big shift for me,” he said.

It’s been a whirlwind as for Kanzer and General Manager Brynn Cox as they’ve gotten Stretch Lab off the ground, he said.

“We’re basically living here right now,” he said with a simle. “We know eventually, it will normalize but at the same time, it’s just really fun. We were joking the other day that we’ll come here to the studio and be here for like 15 hours and it felt like two  hours went by. And we’ll be like, “Oh my god it’s night time. We’ve been here forever.’ So it’s enjoyable. It’s become a nice little family between ourselves and the flexologists, the sales staff.”

Kanzer said the New Canaan Stretch Lab is the first of six total locations he plans to launch—three in Westchester and two more in Fairfield County, towns to be determined.

Asked why he chose New Canaan as his first location, Kanzer said, “I kind of just came here and went around downtown and fell in love with it right away. It’s just such a beautiful place. There’s so much happening here. I was looking at locations all over Fairfield County and all over Westchester, then I came here and I was like this could totally work. And as I got to know the people they definitely do put a premium on fitness and wellness and care about their wellbeing and I just believed that it would work here when people care about this sort of thing.”

Stretch Lab earned site plan approval from the Planning & Zoning Commission in November to open in the 1,800-square-foot former Irresistibles space. With a retail section in front, the stretching tables are comfortably spaced throughout the high-ceilinged main floor. P&Z updated its regulations for the heart of downtown New Canaan in order to accommodate such service businesses, so long as there’s a retail component toward the front.

Tucker Murphy, executive director of the New Canaan Chamber of Commerce, said Stretch Lab is a “good example of how the changes to the zoning regs can attract new businesses.”

“The Stretch Lab concept is new to the northeast and we are thrilled that New Canaan is one of the first to have them here,” she said.

Those already signed up for Stretch Lab have ranged widely, Kanzer said, from a 14-year-old ballerina who came in last week with her mom to many older people who come to relieve and preempt aches and pains.

“We had a customer a half hour ago who holds the record as the oldest man to ever summit Mt. Everest,” Kanzer said. “Another guy here recently was training for the Last man Standing Ultramarathon. So we get everyone, not just those super hardcore into fitness. It’s a little bit of everything.”

And within the world of fitness, Stretch Lab fills a niche in that it’s noncompetitive and complementary to the gym, yoga or pilates.

“No matter what it is you want to do, this will help you just do it better,” he said. “Like for me, I’m a did with little kids. I’m constantly getting on the ground and up and down again and for me, I think things are hurting all the time. So for me, this is my personal way to not be in so much pain while doing that, but at the same time, I love to run and this could help me to be a better runner.”