“Some say that the original Lone Tree has died and been replaced by a new tree. Others indignantly claim that they have been looking at it for 50-60, even 80 years and that it is the same old tree. It is not a large tree, but apparently size is not necessarily an indication of the age of a sugar maple. At any rate, all agree that it has been a favorite trysting place for lovers ‘time out of mind’ and it bears many hopefully entwined initials.” —from “Lone Tree Hill” by Elizabeth P. McGhie, Feb. 26, 1948 (“Landmarks of New Canaan”) 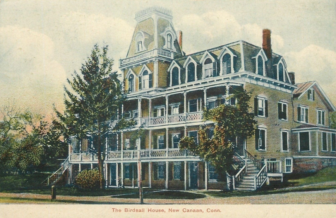 With few exceptions, the landmarks that New Canaanites associate with their town’s rich history are manmade.

Some are gone forever, such as Birdsall House downtown, the knockout pit at Center School or iconic businesses like Brock’s or Breslow’s. In other cases they’re so diminished that only traces remain, such as the submerged ‘Dantown’ village, perambulation line or Dr. William H. Thomson’s “Rockery.” Still others have been lovingly preserved, such as the 18th Century homes that predate the town’s incorporation, or the Congregational Church at God’s Acre (originally constructed in 1752, destroyed by fire and rebuilt in 1843) upon which New Canaan was founded. 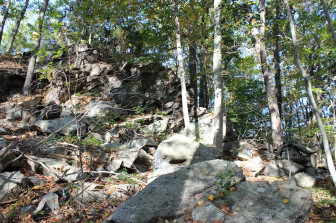 The Leatherman’s cave is said to be in this area of New Canaan, below the cliffs. Contributed photo

In rarer cases, the historical record is substantial enough to show that natural landmarks existed, though not specific enough to say whether or just where they survive—such is the case with The Leatherman’s cave and Stephen Weed’s fort.

And such is the case with “The Lone Tree.”

A local curio said to be visible from Long Island Sound in the early 20th century, The Lone Tree has given its name to a short residential street laid out in 1952 that runs south off of Brushy Ridge Road. Associated with land owned by some of New Canaan’s most prominent historical residents, The Lone Tree also occupies a prominent place in a 1934 WPA “aerial” painting of New Canaan that hangs at Town Hall. 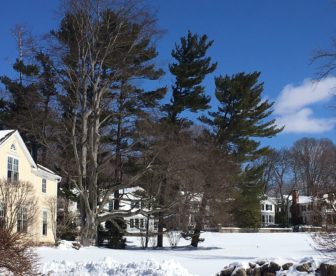 The beech tree alongside the home in this photo from Lone Tree Farm Road near Brushy Ridge dates to the same era as the famed “Lone Tree” landmark in New Canaan. Credit: Michael Dinan

Yet today—as the sprawling farms that defined New Canaan long ago gave way to clusters of trees and residential development—it isn’t clear just where The Lone Tree stood or whether it’s still standing.

Though it has been said for decades that the tree was a sugar maple, the strongest contender for The Lone Tree may be what New Canaan Tree Warden Bob Horan, at the request of NewCanaanite.com, identified as a European beech that stands in the backyard of an antique local home fronting Brushy Ridge Road.

“Many were planted in the United States starting in the mid-1700’s and continuing to this day,” Horan said of the European beech. “I estimate this tree was probably planted sometime around the later 1800’s. It might have been planted when the original farmhouse was built.” 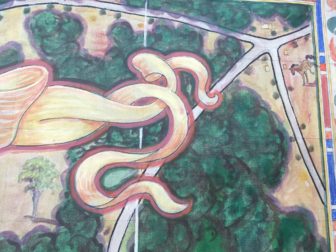 The Lone Tree—in the lower-left hand corner of this close-up—is featured in this 1934 WPA painting by Walter Bradnee Kirby, an “aerial” of New Canaan that hangs at Town Hall. The horse in the upper-right hand corner represents the New Canaan Mounted Troop. Credit: Michael Dinan

That house, an antique that still stands just south of the Brushy Ridge and Lone Tree Farm Roads, may have been included in a 1906 purchase by Victor A. Barnes. A Yale graduate and director of the American Book Company in New York City, Barnes took up dairy farming in New Canaan after spending time in the town as a summer resident, historians say.

Barnes acquired 45 acres from the estate of Gilbert Birdsall, who had been vice president of Manhattan’s Third Avenue Street Railway and, starting in about 1871, had used his property (125 acres) to put out to pasture horses that had operated the horse-drawn trolley line in the city. 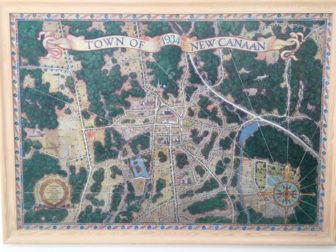 Walter Bradnee Kirby’s 1934 painting of New Canaan is featured prominently at Town Hall, in the hallway on the second floor. The lone tree is visible in the upper-right hand corner. Credit: Michael Dinan

When Barnes acquired the property, he gave it the name ‘Lone Tree Farm,’ and by 1914 had acquired more adjoining land (downhill toward Sturbridge Hill Road) to bring his total land in New Canaan to 106 acres. The property—which worked well for Barnes, who took up an interest in Jersey cows and saw to the breeding of several award-winning beasts, according to local records—certainly was named after a specific tree.

Whitman Bailey in a 1967 article for a New Canaan Historical Society annual, said the farm “became famous, simply because of a lone tree which still stands like a sentinel on the very brink of the hilltop overlooking Long Island Sound.”

“For many years sea captains when navigating these waters always stood for the lone tree as it stood in silhouette against the horizon,” Bailey wrote. “On clear days this tree could be vividly seen by the naked eye. Therefore the farm became known as the ‘Lone Tree Farm.’ ”

According to Bailey, Lone Tree Farm saw “treasures” hidden from British troops during the American Revolutionary War after the 1779 Battle of Norwalk.

“It appears that an alarm was spread stating that the British were coming, but the alarm proved false, and for many years lost treasures were still being unearthed on the top of Brushy Ridge,” according to Bailey.

Barnes, meanwhile, operated the property in the early 20th century (while serving as president of the American Cattle Club) as a dairy farm that supplied milk to the area, historians say—an enterprise that appears to have ended around the time the United States entered World War II.

The property appears to have been subdivided into 15 lots in the mid-1960s—a fact mentioned in a brief police report from June 26, 1967 where 20 teenagers were arrested in a “hay field.” According to the report, published in the New Canaan Advertiser, a Deacon’s Way woman complained to the police about cars parked and a party going on “at the former AV Barnes property” and “police found a large party in progress concealed by the high grass of the field.”

“They reported they found numerous beer cans, cartons and a couch at the scene,” according to the police report. “They said they were told that there had been a party in Wilton and several persons had suggested continuing the party at what they called ‘New Canaan Hill.’ Police said they were told some of the group had been there other times in the past year. Police reported that some of the partygoers smelled of alcohol.”

By then the area was ready for development—and today, with so many new trees grown up around it, the street no longer resembles “the hill and the open fields,” as described in 1948 by Elizabeth P. McGhie in a chapter of “Landmarks of New Canaan.”

“Lone Tree Hill looks tillable, used. It looks as though it could support man and beast,” McGhie writes. “It is the kind of land that makes a man aware of his roots—the kind he wants to pass on to his sons.”

She describes how Lone Tree Hill offers “a very fine view of the whole countryside, and of the Sound and Long Island.”

For McGhie, the view of Lone Tree Hill from “the Marigold Nurseries on Carter Street” is “unexpectedly different.” “You look across wooded land to a perfect grassy mound, and to see it from that point in summer is to want to go and sit under Lone Tree and ‘stop buzzing’ for a long time.”

“But it is perhaps most beautiful on these late afternoons in February when the blue shadows from the stone walls cut horizontally across the great white expanse of open fields, and the special yellow light of winter streams into the sky above the curve of the hilltop,” she concludes. “Go at sunset or sunrise, and do go more than once, for sometimes it looks like just another hill and at others like a symbol for The Land.”