The recent news that the Chamber of Commerce is no longer sponsoring the Pop Up Park has left its future uncertain. While volunteer organizers are scrambling to obtain permits, insurance and town approval, a 2015 debate of how the park affects local business has been reignited.

We spoke to several businesses in the area to hear their thoughts. 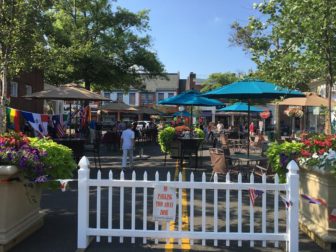 Helen Richards of Odesmith & Richards Boutique on South Avenue describes the park as a “pleasant idea” but in the “completely wrong place.” Her concerns revolve around how the park affects nearby businesses, saying “it blocks traffic and impedes commerce where it is.”

She referred to a letter written by area merchants a few years ago. “The merchants have been complaining about it for a long time,” she said.

Members of the Police Commission last week said that they’d only preserve a planned July 21 to Sept. 3 street closure for the Pop Up Park if the gathering space’s organizers obtained insurance and other necessary items that the Chamber had secured in the past. Though the Pop Up Park volunteers told the Commission that the New Canaan Community Foundation was lined up as a possible sponsor, representatives from that nonprofit organization contacted NewCanaanite.com Thursday saying that’s not true. The park’s organizers could not be reached for comment.

The Board of Selectmen is expected during a special meeting Tuesday to decide the Pop Up Park’s immediate future, as it determines whether what’s been described as a required “Special Events Permit” can be issued.

Richards, whose business abuts the park, said she wants changes in its location and duration.

“If we must have it, let’s reduce the length of it, try to find a different location for it,” she said, mentioning Town Hall, the library or something aligned with the Farmers Market.

Yet it has “been a very shuttered approach” taken by the organizers, Richards said— “our way or the highway.”  She said she’s hopeful that the issue will resolve itself now, saying that “this is very encouraging that the Chamber of Commerce has essentially sided with the merchants saying that it is not good for commerce… maybe the whole idea can go back to the drawing board.”

Not everyone feels that way.

Jim Barry, a co-owner of Mackenzie’s, next door, said his mainstay downtown business has been “a vocal supporter” of the Pop Up Park since it launched.

“I think it’s good for the town, we like having it,” Berry said.

“I was looking forward to it opening this year, and I’m very disappointed that its opening is in doubt,” Berry said.

Still, Berry said that he remains optimistic that a solution can be worked out.

“I don’t quite understand all the issues, but I hope they overcome them…I’d like to see it happen as it was originally planned,” he said.

Phyllis Weinstein, also a co-owner of Mackenzie’s, said that the park is not for merchants but for the citizens of New Canaan.

“There was a man who was having a really bad day, and I guess he met his family at the park,” she recalled. “He told me this story and said, ‘I came and I sat down in that park and it changed my whole attitude.’ That’s what it did.” 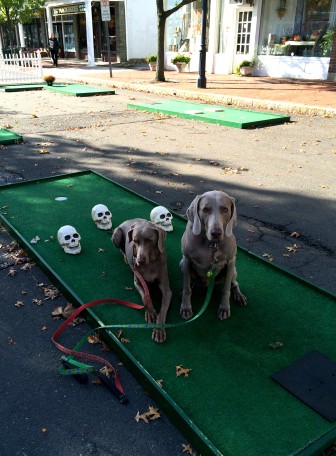 The Park includes seating for pedestrians, mini golf, and hosts various other fun events throughout the season. Credit: Michael Dinan

Elm Street Books owner Susan Rein said she believes that the park should be re-evaluated, not scrapped all together.

“I think the problem that most of the merchants have with the Pop Up Park is how it affects the retail environment,” she said. “If they would just move it out of the middle of that street then that would be fine. I think that blocking 50 percent of the entrances to Elm Street is the problem, not the Pop Up Park itself.”

Rein said she “believes that the selectmen will do what’s best” as the project moves forward. Volunteers are planning to go before the Board of Selectmen next week to obtain town approval, preceding a Police Commissioners meeting on July 18th to re-evaluate the priorly approved planned road closure required for the event.