The New Canaan Police Department is in the process of simplifying its mission statement to a single sentence: “To protect and serve our community with courage, professionalism and integrity.” 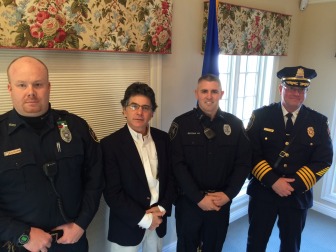 Courage, professionalism and integrity—in the predawn hours of Saturday, Oct. 18, NCPD Officers Michael O’Sullivan and Brian Micena demonstrated those heroic qualities in saving the life of 52-year-old Charlie Taben, a New Canaan resident who had gone into cardiac arrest at about 2:45 a.m.

When officers arrived at the house within minutes of the dispatcher’s call, the officers found that Taben had no pulse and wasn’t breathing, Chief Leon Krolikowski recalled Monday morning.

“Brian and Michael relied on their training, worked as a team and connected the AED [automated external defibrillator],” initiated a shock and commenced CPR—almost certainly saving Taben’s life, Krolikowski said during an Awards Ceremony for the officers, held in the Lapham Community Center.

“This award is presented to any member of our department for an act performed in the line of duty which through disregard for personal safety or prompt and alert actions results in saving a life or preventing serious physical injury,” the chief said. “Certainly they saved a life, no doubt about that.” 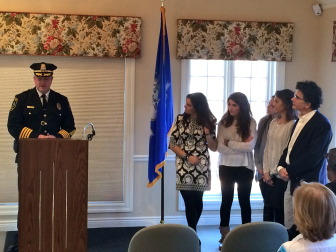 Charlie Taben, a few days shy of his 53rd birthday, said during the ceremony that he was “forever grateful” for the officers’ swift, decisive life-saving actions. New Canaanites may recall that one of his daughters, Isabel—inspired by her dad, hospitalized for much of the FCIAC tournament—led the Rams varsity field hockey team this fall to a dramatic county championship victory against Darien.

During the ceremony, Krolikowski, adding that the officers are making good a charge to “get it right,” commended O’Sullivan and Micena for winning “the respect and admiration of the Taben family and our entire town.”

“You were true to your calling,” Krolikowski said. “You saved a life and ensured that a father would be there for his family. I can think of no greater act.”

Krolikowski thanked the New Canaan Volunteer Ambulance Corps as a close partner of the police and whose EMTs took over the life-saving duties from the officers on the morning of Taben’s heart attack, as well as the doctors and nurses at Norwalk Hospital and community members who donated money to ensure that police cruisers are equipped with AEDs. 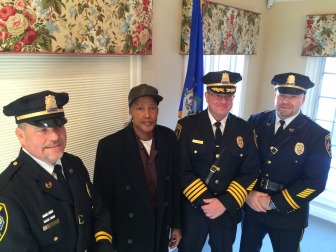 Also honored during the Awards Ceremony and presented with a Civilian Service Award was Terry Darden, whom Krolikowski noted works three separate jobs—at Walgreens, Staples and as a crossing guard—to support his family.

Darden at about 8:25 p.m. on Sept. 25 while working at the pharmacy had spotted two men acting suspiciously and notified police. A subsequent investigating revealed that the men had been wanted in separate jurisdictions for fraud and theft, and Darden’s tip led to their arrests.

“Thank you for being such a hardworking man in our community who is not afraid of getting involved in order to help others,” Krolikowski told him.