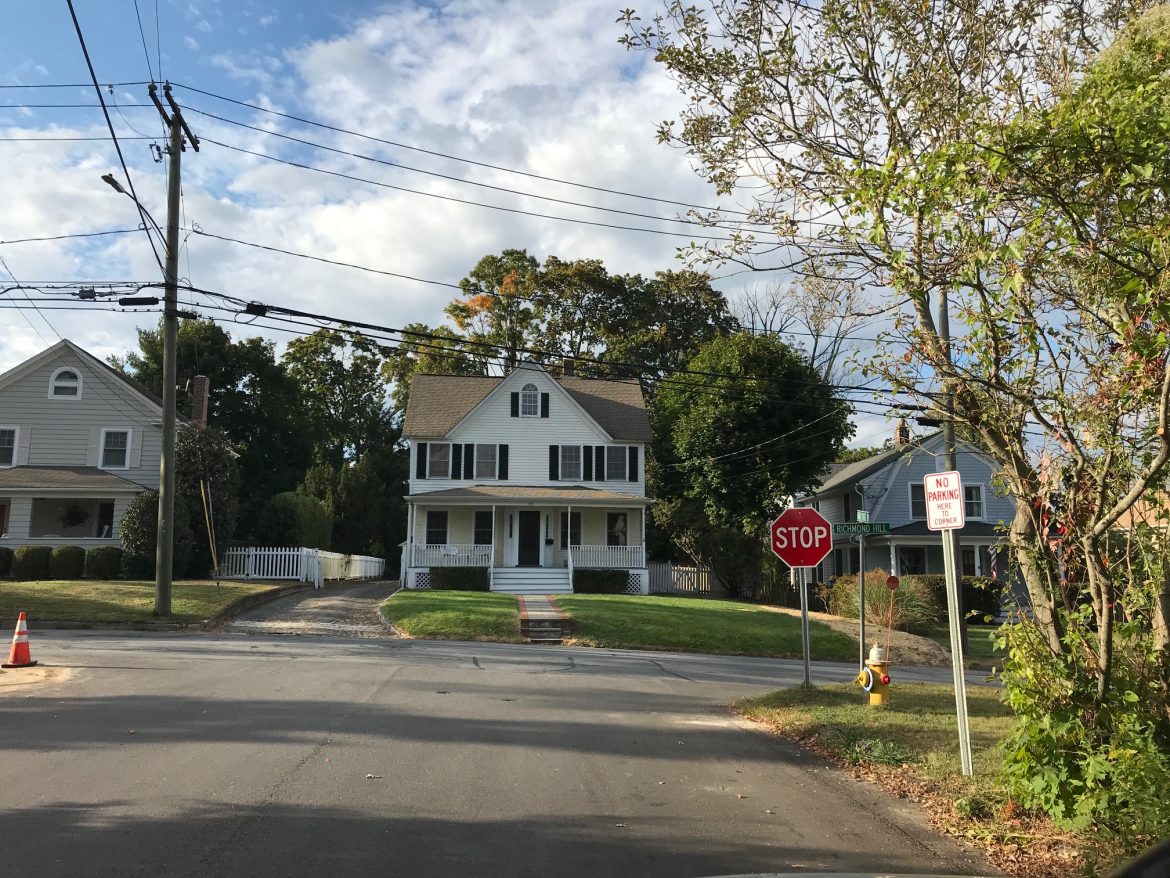 On Marshall Ridge Road looking at the Richmond Hill Road intersection. That sign on the right, it's new. Credit: Michael Dinan

Town officials have installed new parking signs in a residential neighborhood just south of the downtown following concerns from residents there that increased on-street parking has created a safety hazard.

At the recommendation of the Traffic Calming Work Group, ‘No Parking Here To Corner’ signs have been installed toward the northern end of Marshall Ridge Road, where it intersects with Richmond Hill Road.

An administrative team that includes members of the Police, Fire, Parking and Public Works Departments, the Work Group fielded a Marshall Ridge Road resident’s request for traffic-calming following what she described as a car crash during the morning school and work rush.

According to Dawn Belles, a vehicle traveling eastbound on Richmond Hill Road at about 8:10 a.m. on a recent morning struck a vehicle with a mom driving her son toward school as that car tried to exit from Marshall Ridge.

“Its very lucky kids weren’t around crossing to get to the bus stop on [Marshall] Ridge,” Belles wrote in her email to traffic officials, obtained by NewCanaanite.com through a public records request.

With motorists, possibly commuters, parking on both sides of the road in the morning, that end of Marshall Ridge becomes dangerously narrow, to the point where school buses sometimes have difficulty getting through, Belles said in the letter.

“We need one side—West side at corner—to be car free so cars can make it around the corner off Richmond and not ’t’ into another car going the other way if both sides parked and only one lane to get in/out to Richmond,” she said.

Police Deputy Chief John DiFederico said during the Work Group’s Sept. 17 meeting that he visited the area during the morning hours and “it does get constrained when you have some vehicles parking on both sides.”

The situation appeared to be exacerbated with construction and landscaping vehicles also parking on Marshall Ridge, he said during the meeting, held at New Canaan Police headquarters.

Parking Manager Stacy Miltenberg asked whether there’s a fire hydrant on one side of the street there, and DiFederico said yes, on the east side.

Public Works Director Tiger Mann said he could install a ‘No Parking Here To Corner’ sign 25 feet from the corner.

Asked whether Police Commission approval would be required for the installation, Mann said no because it’s in the state statutes.

Miltenberg said her office sometimes gets calls about the parking situation there and that her response is that enforcement officers cannot do anything if there’s no signage.

Mann said the signs will make the parking restrictions enforceable. The signs were installed last week.