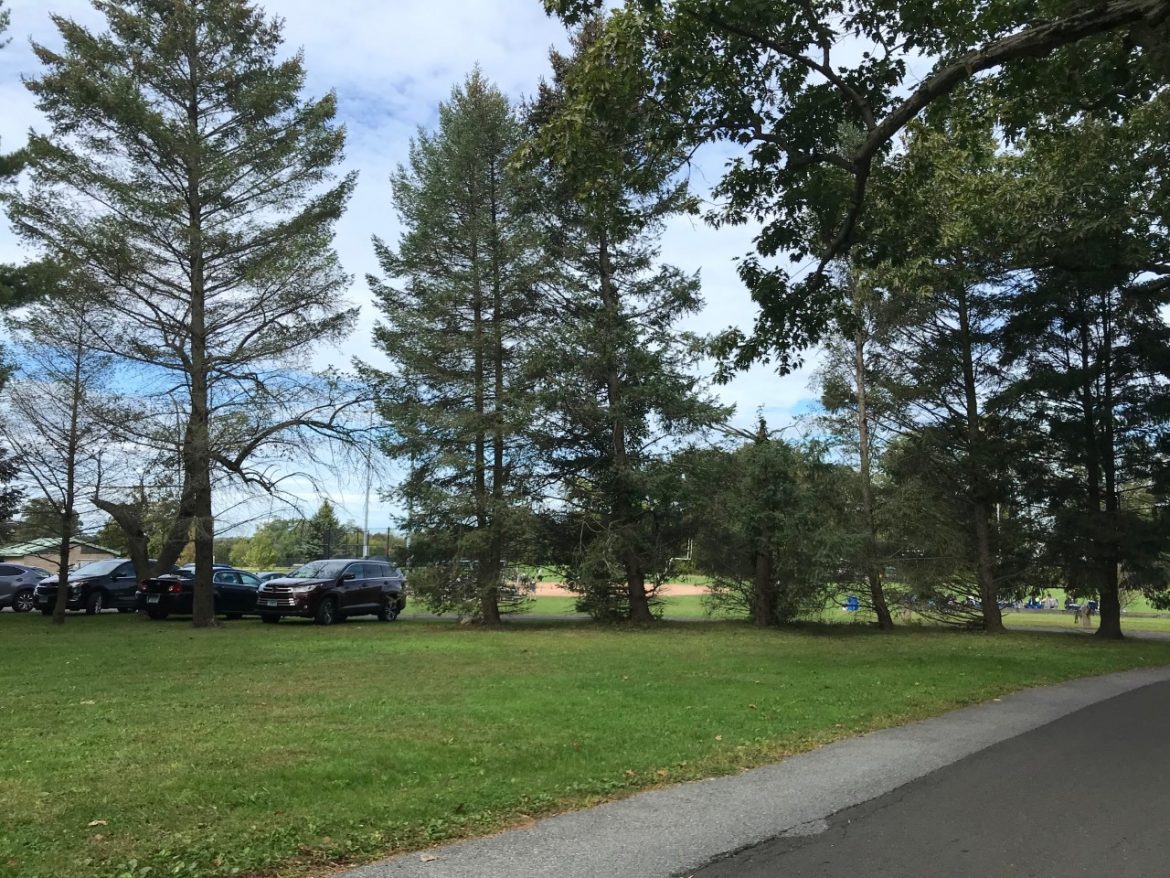 The area between the main road through Waveny and Orchard Field parking lot, which is where the planned outdoor ice rink would go (the lot). Credit: Michael Dinan

In a break with precedent, parks officials voted last week to allow commercial advertising on a single-season trial basis for a recreational facility planned for Waveny.

A private group seeking to establish a seasonal outdoor ice rink at Waveny plans to install the 60-by-120 structure some time later this year in part of the parking lot that serves the Orchard softball field.

By selling ad space on the rink’s “dasher boards”—the panels lining the inner wall of an ice rink—the private group could raise about $20,000 to $25,000 annually to help offset operational costs, one of its members, Gene Goodman, said during the Nov. 10 regular meeting of the Parks & Recreation Commission.

It’s unclear just when the ice rink would be installed or how long it would be in place. Another member of the group, town resident Tom O’Dea, said they’re trying to get it up this month or next, and that it could be in place for two or three weeks or a couple of months, depending on how quickly Eversource is able to install electrical equipment, and how much money can be raised. The group also planned to meet over the weekend with a potential sponsor for “naming rights” at the rink, he said.

The dasher boards “would go on the inside of the rink,” O’Dea said.

“So you wouldn’t see it from the outside. I mean, you could if you were at a certain angle maybe you would see it. But up by the parking lot where the rink is going to go, it’s kind of up on a hill, so I don’t think you would really be able to see it unless you were right up close, either in the rink or very close to the rink, you wouldn’t be able to see the ads on the dasher boards.”

The Commission asked how many dasher boards could be installed (Goodman said a maximum of 48, though he, O’Dea and Granito gave different dimensions for the boards) what are the rink’s operational costs (mainly electricity, about $175,000 for three months), whether an outdoor rink in Westport has such ads (yes) and whether local businesses such as liquor stores or a proposed tobacconist would be allowed to advertise at the rink (no).

Green asked whether there was “any precedent for commercial advertising in the public parks.”

Recreation Director Steve Benko said that Parks & Rec in the past denied a request to put “the same kind of 6-foot banners around the fence on the softball fields and the baseball field.”

“About a decade or so ago, the Commission came out and said they didn’t want any advertising in the parks,” Benko said. “So what they did allow the sporting groups like the lacrosse and soccer and youth football and baseball and softball, they could make a [single] banner saying ‘New Canaan Baseball thanks our sponsors’ and list their sponsors on the banner. They didn’t want 50 signs or 30 signs on the outfield fence, because they just didn’t want to have the whole commercial advertising in the park.”

He added, “This seems like it would be contained inside the rink. Does it set a precedent where the other sports are going to come back and say, ‘Well, we did it for the rink, why can’t we do that?’ Baseball and softball. That’s just something to think about.”

Segalas noted that in Westport, “the Realtors can put their names and the name of their firm on the real estate signs—in this town you cannot.”

“So i sort of lean toward not having exposed advertising,” she said. “And I like Steve’s idea that mentioned you could have a panel saying that we thank all our sponsors. How does that work? Would that be OK?”

O’Dea said that limiting the advertising that way would not raise a sufficient amount of money.

O’Dea said the dasher boards were about 7.5-by-2.5-feet. Goodman said they would be placed a maximum of about four feet high, measuring from the surface of the rink.

O’Dea said the group would seek to sell seasonal passes as well as $10 per-day skating passes.

Goodman said the group “would like to incorporate also the possibility, which Westport does, on the Zamboni-type machine, they put an equivalent banner on their Zamboni, which is typically in a tent, but in their case it’s an innate permanent structure .”

“It comes out and cleans the ice, goes back into its—in our case it would be a tent,” Goodman said.

In September, a proposed $100,000 allocation from $6 million in federal American Rescue Plan Act funds for the ice rink appeared on a working spreadsheet for the allocations. That item has since been relegated to an ARPA spending category of proposed allocations that “don’t meet goals or need clarity,” documents show.

According to a Sept. 24 email from Rita Bettino (who has since been elected to the Town Council), members of the private group behind the ice rink include herself as well as O’Dea, Goodman, Granito, Kerra Smith, Maria Weingarten, Pavla Levin, and Sarah Arestia.