A northern New Canaan family on Sunday morning photographed a bobcat in its yard—the second recorded sighting of the elusive species in town in as many months. 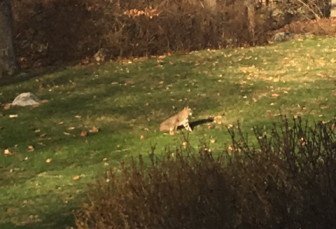 This bobcat was spotted and photographed around 10 a.m. on Sunday, Dec. 20, 2015. Photo published with permission from its owner

The animal was spotted at 10 a.m. in the back yard of a residence on Michigan Road near Lukes Wood Road, according to the homeowner.

The animal “seemed comfortable,” the resident said in an email.

“He lingered on our lawn in back and went into the woods when we went out on the deck,” the resident said.

Officials reported in October that a bobcat had tripped an outdoor camera in the woods near Oenoke Ridge at Turtle Back Road.

It isn’t clear whether it’s the same animal. Police have said there are at least two verified bobcats that have made dens in New Canaan: One on Ponus Ridge on the western side of town and another near Gerdes Road.

Bobcats generally avoid developed areas, officials say, keeping one main den and perhaps additional ones—making them very difficult to photograph. The animals rarely cause problems for humans, officials say, though they may sometimes prey on smaller animals such as shrews, as Halm has noted, as well as rabbits and raccoons.

A bobcat was spotted in early April on Wahackme Road, and a bobcat kitten that had been seen about one year ago on Deep Valley Road was not seen again. In July 2014, a bobcat was seen on Lukes Wood Road, and this past February a rare photo of a bobcat was captured on Jelliff Mill Road.