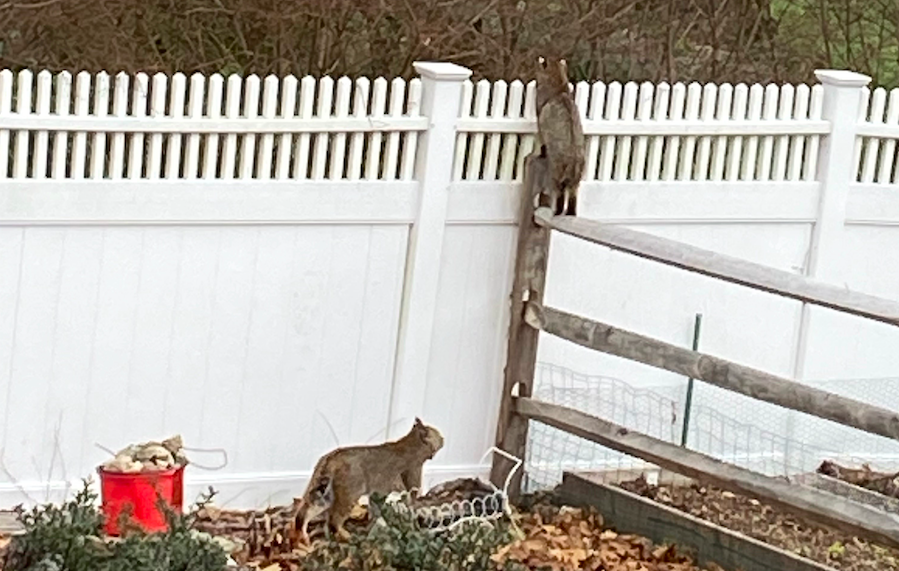 Three bobcats were spotted this week on Marvin Ridge Road—the sixteenth sighting of the species this year, according the to New Canaan Police Department’s Animal Control section.

The trio likely is composed of a mother bobcat and her two kittens, Officer Allyson Halm said.

“There is a lot of good habitat,” Halm said, referring to the Hoyt Swamp, which runs between Marvin Ridge Road and Route 123 just north of the Merritt Parkway. “They tend to hide away, though sightings seem to be more common now.”
She added, “It seems like they are just getting more comfortable around us.”

Asked what residents should know about bobcats, Halm said, “They certainly don’t have predatory instincts like coyotes do for other canines or felines. They are strictly rodent eaters, bird eaters. And most of them are in the Marvin Ridge area.”

Bobcats breed in February and March, and one to four kittens generally are born in a litter in April. Sightings of the reclusive species have been reported on Marvin Ridge Road in the past.

Officials long had believed that New Canaan had two bobcats: One that travels the Ponus Ridge corridor on the western side of town and another in the area of Gerdes Road. In September of 2014, a bobcat kitten was seen on Deep Valley Road, and Animal Control officials predicted at the time that the town would see more of them.

In 2015, bobcats were spotted on Jelliff Mill and Gerdes Roads in February, Wahackme Road in April, Oenoke Ridge in October and Michigan Road in December.

They’re most active after dusk and before dawn. Bobcats make dens from which they may travel up to four miles per day.

Halm said the recent sighting is a good reminder that “we all live here together and it is the breeding season and also hunting season.”

“So people should be alert and aware that there will be heightened activity” among wildlife, she said.