The 12-year-old flat-coated retriever missing from a Carriage Lane home since Monday night has returned safely, his owner said.

Christian, a dog rescued about 10 years ago from a family that had been mistreating him, ran away Monday at the sound of fireworks, Lydia Clay said. She contacted local media and several neighbors. This afternoon, shortly before 4 p.m. he returned home.

“He loves my neighbors dog and showed up at her house a little while ago,” Clay said.

The owner of an older, black flat-coated retriever that went missing Monday night from a dead-end street that runs off of Frogtown Road is calling on fellow New Canaanites for help in finding him. 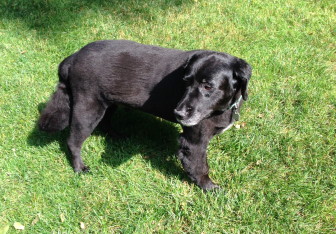 Christian is an older, flat-coated retriever. He went missing on the night of Monday, Sept. 1 from the area of 36 Carriage Lane. Contributed photo

The dog, Christian (pictured at right), may have become scared when firecrackers were set off in the neighborhood, said Lydia Clay of 36 Carriage Lane.

Christian looks like a long-haired black Labrador retriever and he’s a rescue dog, about 12 years old.

Clay said her family got Christian in May of 2005.

“We had a black Lab at the time who was very lonely because our chocolate 15-year-old Lab died,” Clay said

“A friend of mine, Diane Roth, who owns L’Armoire in town rescued Christian from a family who was not treating him well. She thought he was a great dog and would do well in our home with our black Lab. They got along instantly and were best friends. Our black Lab died at the age of 16 and Christian was miserable. But he loved being with my husband and me and loves being the center of our attention.”

The family will be heartbroken if Christian isn’t found, Clay said.

“I feel scared that he may be hurt and cannot find his way home. He is old but still has some good years in him and we want to be able to enjoy those years with him . He is so sweet and loving. He is wonderful with small children and loved to be petted and payed attention to.”

Here’s where he went missing from:

One thought on “Flat-Coated Retriever, 12, Returns to New Canaan Home after Overnight Disappearance”