Subway, the national made-to-order sandwich shop that’s operated out of its Main Street location opposite Town Hall for more than 25 years, has closed its New Canaan store. 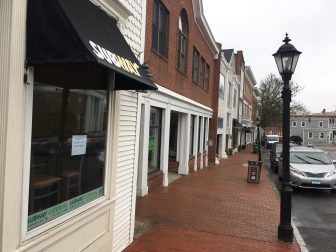 A sign has appeared in its front window saying “Store closed. Reopening under new leadership.”

It isn’t clear whether or when a Subway would reopen at 64 Main St.—company officials could not be reached for comment.

Subway has closed hundreds of stores nationwide, faced with a slowdown in sales.

Laura Budd of the New Canaan Chamber of Commerce said the organization is “certainly sorry to see Subway leave.”

“We know that it’s popular with the younger kids in town,” Budd told NewCanaanite.com. “We know that franchise businesses are very difficult. We’ve had some interaction with the owner, he’s a very nice guy and really had been working hard to make it a go, so we hate to see him go.”

Tucker Murphy, the chamber’s executive director, added: “This highlights that that area of town needs to be our focus right now.”

Main Street between Locust and East Avenues has seen multiple vacancies in the past two years, with JoS. A. Bank and Island Outfitters leaving, among others.

It has emerged as a focus area for officials who oversee the downtown. The town planner has consulted the chamber about the prospect of updating the New Canaan Zoning Regulations to allow more than strictly retail in street-level commercial spaces there.