One remarkable thing about our community is that, with very few exceptions, we made it through two years of a global pandemic without seeing any of our beloved restaurants close.

You can attribute that to the hard work of restaurant and food service teams, as well as the dogged generosity of our town’s restaurant patrons. In my case, I was often just completely unwilling to make my own lunch in the middle of a long workday, or too lazy at night to cook. Either way, in appreciation of a restaurant scene we’re incredibly lucky to have, here are five dishes I kept going back for this past year. 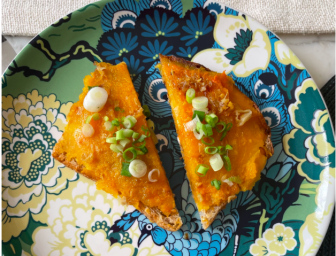 As a society, we don’t talk enough about the magic of Unidentified Crunchy Things and why they need official designation as a food group. I’m pleased to open this dialogue by citing one genius example of their use: the butternut squash toast from New Canaan’s go-to salad joint, Greens on the Go.

A sturdy, toasted square of sourdough is topped with velvety, slightly sweet, pureed butternut squash. On its own, this would be an excellent lunch for anyone wary of avocado’s hegemony in the “things we put on toast” category. But the Greens on the Go team, citing California as their inspiration, seems to enjoy the call to innovate, so they add complexity with ginger shallot oil, sliced scallions, and some crunchy, savory little bits. In praise of bits: they’re the thing you never knew you needed, lending surprising textural chutzpah to each bite. They might be toasted breadcrumbs. In fact, I’m sure they are. But let’s not look too hard at this magician’s trick, and instead, just enjoy the show. 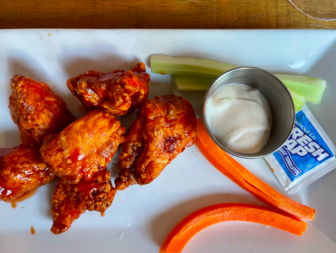 Here’s my (unpopular) opinion: chicken wings are terrible party food.  If you wish to suck every last bit of meat from a bird’s deep-fried ulnar joint, let your maker be your only witness, or, at most, your emergency contacts. My lifelong desire never to see people eat wings in public is so ardent, I will quicken my pace and avert my eyes when I pass a Buffalo Wild Wings at any airport.

But buffalo sauce is delicious, and I’m not one to suffer for my beliefs. The answer can be found at New Canaan’s own Gates Restaurant: they offer, with the same preparation, Chicken Wings or Boneless Bites. Both are deep-fried, both come in multiples of six with the classic panoply of sauces, ranging from unrelated (garlic butter) to “volcanic”. While I can’t speak for the bone-in wings, the boneless ones are executed to perfection. The tender white meat seems hand-cut, with craggy, spiced breading and just enough warm buffalo sauce to remind you that, while you may technically be eating a chicken nugget, you’re no toddler.

On a recent Friday lunch date, I knife-and-forked my boneless chicken bites like a lady, with #1 hot sauce, celery and carrot sticks, the customary ramekin of bleu cheese, and a glass of Sancerre. Would I get kicked out of Buffalo’s Anchor Bar, the birthplace of chicken wings, for that kind of behavior? Probably. But that’s just another reason why I don’t live in Buffalo. 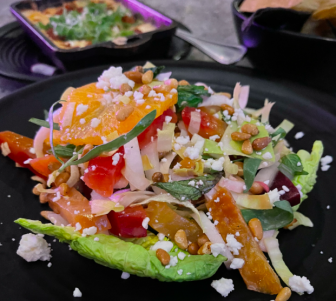 3. Beet & Endive Salad from South End The Back End

Chef Nick Martschenko has a canny understanding of what people want to see on a menu, and he’s built a little New Canaan restaurant empire to prove it. From lobster lollipops to steak frites, everyone I know has a go-to from his three in-town restaurants. What I find smartest about his approach, though, is a simple idea that completely flouts casual dining convention: make fantastic salads. They’re not an afterthought; they’re actually integral to three solid, if conceptually distinct, menus. Even at Uncorked, a spot that traffics largely in the business of brews and bros, the salads are seasonal, unfussily inventive, and way tastier than most anything I make at home. It’s as if someone has finally figured out that women like to eat at bars, too.

The Beet & Endive salad at South End Restaurant Group’s photogenic newcomer, The Back End, may not be what you’re going there to Instagram, but it’s what you should go there to eat. It’s a smart combination of textures (crisp slivers of endive, crunchy toasted pine nuts) and vivid flavors (curly young lettuce leaves, suprêmes of ruby red grapefruit) with red and golden beets to give it earthiness and structure. There’s tarragon in the vinaigrette, and the overall effect is bright and vegetal, a pleasant counterpoint to the queso fundido and cheeseburger tacos someone at your table will, no doubt, order. They’re delicious for certain, as is the flower petal-strewn tortilla soup. But while everyone fusses over their photographs, shovel more salad onto your plate. You won’t be sad.

Nobody, at least nobody I follow on Instagram, ever said “hey look at this incredibly sexy beet salad”. It’s never going to be the “it” dish. And maybe that’s why I like it so much: they didn’t have to make it fantastic, but they went ahead and did it anyway. Let someone else Instagram their dinner; I’m here to eat. 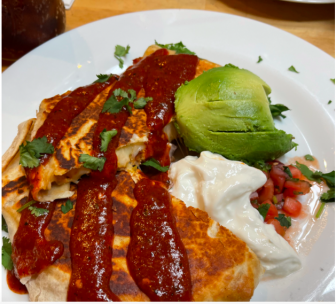 Taco Bell may have invented the Crunchwrap Supreme, but, as an old boss once told me, nothing’s “been done” until it’s been done right. And Rose Bonura and the friendly team at her eponymous daytime crowd-pleaser, Rosie, have done exceedingly right in the category of hexagonal, quasi-Mexican food.

For anyone sadly unfamiliar with this particular corner of gastronomy, once you’re done applauding whatever life choices kept you from visiting a Taco Bell for the past sixteen years, be grateful that you’re here now, because you can have the real deal. Rosie’s Spicy Crunchy Wrap is made with integrity and love, as with everything she does, and she makes a couple of key ingredient swaps that truly elevate it.

She takes a burrito-sized flour tortilla and wraps it around a corn tostada (crunchy wins again!) with shredded, spicy chicken, melty cheese of undetermined origin (it’s probably Jack but I like a mystery) and beans. The whole thing gets griddled, because of course it does, and enchilada sauce, chopped cilantro, and half an avocado give the whole thing a healthy dose of refinement and plate appeal. Your server will ask you if you want sour cream, and now is no time to get on your high horse. Get the sour cream. Share with another person if you must be dainty, but be prepared to order another.

* A recent online perusal of the Rosie menu didn’t reveal this dish. Hopefully, if you ask nicely enough, they can still make it. 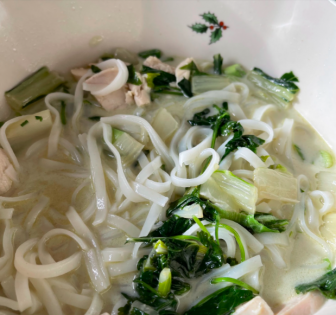 “Comfort food” is an overused phrase that often just serves as air cover for adults to consume bowls full of macaroni and cheese while standing over the sink. Lest you think I’m judging that behavior, I ate Cheez Its for dinner the other night and I am completely without regret. But don’t give me linguistic sweatpants to justify weird eating habits, especially when there’s  “food that comforts” and yet, involves no shame spiral whatsoever.

I never met a dish from Miyuki’s Noodle Shop that I didn’t like, but, especially in winter, her spicy coconut chicken noodle soup has become my panacea. Am I coming down with something? Get the noodle soup. Stressed? Get the noodle soup. Feeling perfectly fine? Better get the noodle soup anyhow. It’s built on a collagen-rich bone broth base, with deeply flavorful Asian aromatics like ginger, lemongrass, and chile peppers. Coconut milk and rice noodles give the soup mellow richness, but bok choy, scallions, and cilantro keep things bright and lively.

Anything slurpy and noodle-y is ultimately comforting, whether you need that comfort or not. And with COVID making its (hopefully final) rounds through our community, you don’t need any kind of justification to deserve a soul-warming noodle soup. You just need to get someone to pick it up for you at the Pine Street Concessions food hall.

And don’t let them leave without one of Miyuki’s cookies. If you know, you know.

4 thoughts on “The Year in Review: Five Standout New Canaan Foods of 2021”