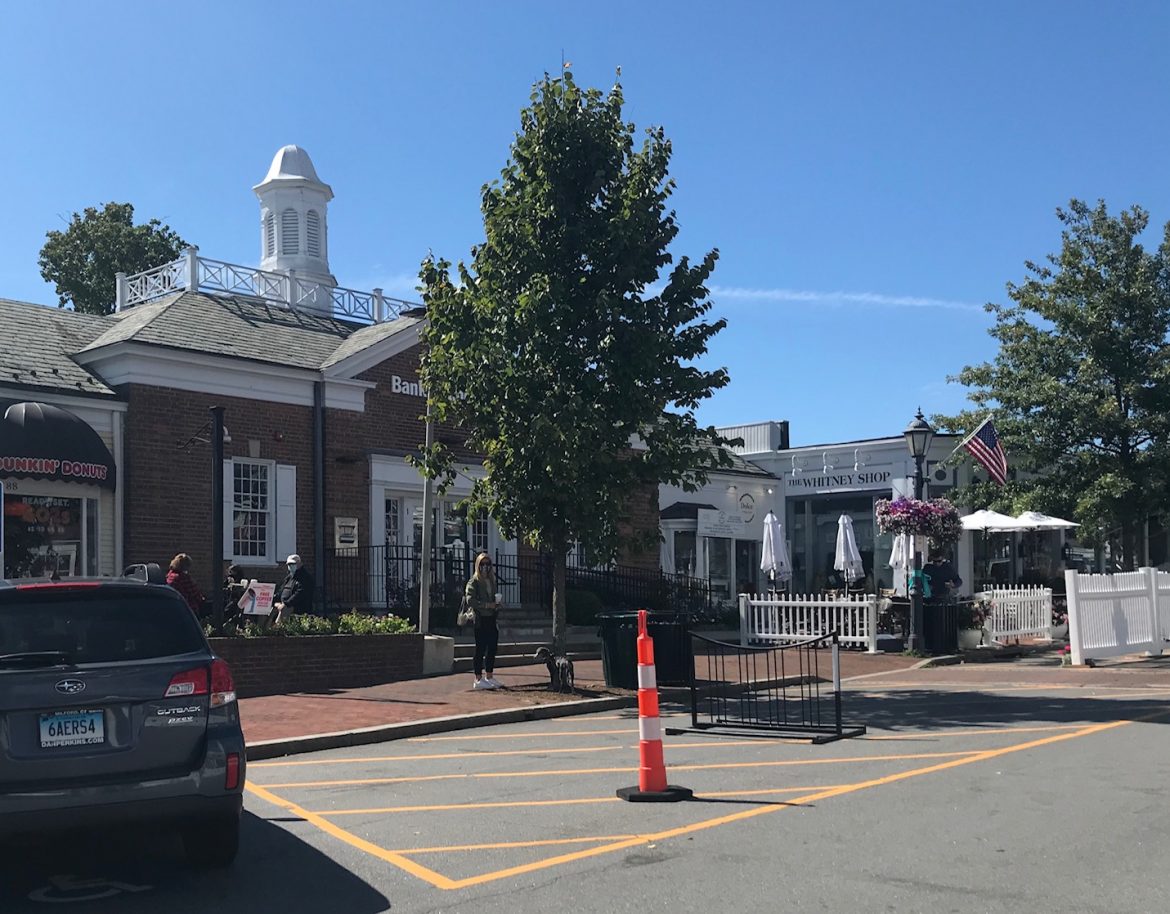 The restaurant “bump-outs” and revised parking and sidewalk schemes downtown have led to safety hazards because motorists are pulling into no-parking areas and even blocking crosswalks, official say.

Trucks are pulling up along crosswalks so that it’s impossible to see pedestrians, according to Parking Commission Secretary Pam Crum.

“There has been a lot of abuse going on as of late,” Crum said during the Commission’s regular meeting, held Sept. 10 via videoconference.

Crum questioned whether appropriately sized planters could be set up in areas such as Elm Street near Dunkin Donuts in order to prevent vehicles from parking where they shouldn’t.

“The planters were there before and it wasn’t a problem,” Crum said. “But these trucks that are parking there—you can’t see anything. At least with the planters, you could see past them on either side.”

The town in May approved a new sidewalk and parking plan on Elm, Main and Forest Streets designed to give restaurants more outdoor dining space amid COVID-19 virus-related restrictions from the state.

Commission Chair Keith Richey said it’s “wonderful” that the restaurants have expanded dining areas to “help them survive the COVID crisis.” He continued, “But it has limited the amount of parking, and I have been downtown a few times and I have seen people try to back up into these strange spots that are kind of left on the one side of Elm Street where the bump-outs are.”

Even so, Richey said, it isn’t clear whether the Parking Commission itself could address the issue.

“It is a problem—I’m not saying it’s not a problem—but I don’t see a policy decision we can vote on or do,” he said.

Crum noted that the Police Commission the New Canaan body that oversees on-street parking in town.

“It is the Police Commission’s area to deal with it, but it just doesn’t seem to get done,” she said. “It just continues to be a problem there.”

Commissioner Chris Hering suggested using bollards, a traffic device that has been used in the past at the mid-block crosswalk on Elm Street.

Commissioner Laura Budd said the New Canaan Department of Public Works has a plan that includes new curbing for that crosswalk, but “all of that got kind of put on hold and now we’ve got all the fences out there.”

“At some point, all that stuff is going to have to come up anyway,” she said. “The white jersey barriers, once it starts to snow. And maybe eventually we will come back to that curbing plan. Because people will come—we have got a bike rack in there now, and then a cone. And people will either squeeze themselves between the bike rack and the cone or they will just move the cone.”

Tucker Murphy, a guest at the meeting who works for First Selectman Kevin Moynihan, said, “Cones do work.”

Asked about how the town is enforcing parking restrictions in such areas, Parking Manager Stacy Miltenberg said enforcement officers “are trying to educate” truck drivers.

“We are trying to hopefully train some of these truck drivers that are consistently coming into our town and usually, the same route,” she said. “Telling them where to park would be the best, even if they have to double-park to park in the wider area on Main Street by the loading zone. If the loading zone is full, on one side of Elm Street. If they are blocking a crosswalk or a no-parking zone, we ask them to move. So we are trying. We are trying to get the word out there and educating them. We know they have a job to do and it’s not easy.”

Asked by Richey whether there’s more the Parking Bureau could do to improvement compliance, Miltenberg said, “I think as of right now we are doing the best we can do.”

“When we see them, we ask them to move,” she said. “We try to direct them on where to go, tell them were the loading zone is on South Avenue. Some of them don’t know where [is] the best place—if they have to double-park—to double-park. Until we kind of get a handle on what we really need to do, maybe kind of only have deliveries during a certain time during the day. I think that’s the best we can do right now. Just try to keep them out of the really dangerous zones. Crosswalks, no-parking zones. Things like that.”

One thought on “‘There Has Been a Lot of Abuse’: Commissioner Flags Poor Parking Downtown”