The 31-year-old New Canaan woman arrested by warrant this month on animal cruelty charges has received numerous death threats and abuse through social media, according to an attorney representing her Wednesday in a separate matter.

People have been calling Heidi Lueders since it was made public that five dogs that died in her care while she was living in Fairfield, said David Bothwell, a public defender in state Superior Court in Norwalk representing the woman for bond purposes following her arrest Tuesday night.

Lueders was arrested by New Canaan Police following a domestic violence incident on charges of second-degree threatening, third-degree assault and disorderly conduct. Police withheld details of the incident, saying it was a domestic matter.

Flanked by judicial marshals in the jury box with three others “overnights” being arraigned, Lueders looked on in silence during her hearing in Norwalk court. She wore black cotton spandex and a baseball T-shirt torn at the right shoulder, revealing a tattoo that appeared to run down her arm.

Judge Maureen Dennis denied Bothwell’s motion to disallow a TV crew from filming the proceedings, citing “Connecticut rules of openness and transparency,” and issued a protective order, instructing Lueders not to threaten, abuse, harm or assault the victim or else face further felony charges.

Her case was continued to March 6 in Norwalk.

She is to be arraigned separately on Feb. 13 in state Superior Court in Bridgeport for five counts of animal cruelty.

Bothwell said Lueders has no criminal convictions, including for failure to appear, and that her family members were in court to assist her.

Dennis agreed that Lueders could be released on $10,000 bond and referred the case to Family Services, saying the woman would need to undergo evaluation for mental health issues and substance abuse, and comply with recommended treatment. As a condition of her release, Lueders also is not to possess firearms or ammunition, Dennis said. 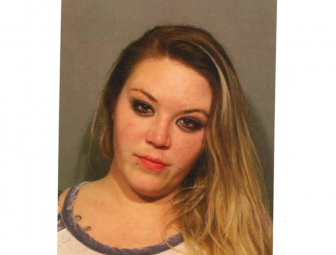 At about 9:46 p.m. on Jan. 29, New Canaan Police were dispatched to a Marshall Ridge Road home on a report of an incident involving two occupants of the residence, officials said.

It isn’t clear what the dispute involved, how it turned physical, what was the extent of the victim’s injuries or how the two parties are related—police withheld details, characterizing the incident as a domestic matter.

Lueders was held on $10,000 bond and scheduled to appear Wednesday in state Superior Court in Norwalk.