When it was generally accepted that last season’s FCIAC Championship would probably be the last in conference history, most agreed that the heart-stopping contest between New Canaan and Darien was a fitting end to a storied history of title games.

Fortunately for area high school football players, coaches and fans, the Blue Wave’s 28-21 win over the Rams last Thanksgiving would not be the final chapter—the FCIAC was able to work things out to salvage the conference championship game, the 50th in league history. And wouldn’t you know what two teams would end up facing each other in the Turkey Bowl in 2015? 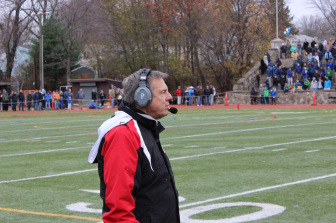 The stage is set once again as the league’s most bitter rivals will face off Thanksgiving morning at historic Boyle Stadium in Stamford. The major difference this season is that this will be the only time New Canaan and Darien will play one another, as the Wave moved up to Class LL while the Rams remained in Class L. Without the possibility of a rematch in the state playoffs, the stakes—and the intensity—will be even higher on Thursday. And upon analyzing both teams, the game should be another classic.

Both the Rams and the Blue Wave are undefeated at 8-0. Both teams overwhelmed their opponents throughout the season with a combination of a deep, dangerous offense and an equally adept defense. Both teams were led by record-setting stars and legendary coaches who continue to defy age and time, consistently reloading their programs which are undisputedly the best in the conference, if not the state.

Kickoff for the game is scheduled at 10:30am.

Here’s exactly how to get to the parking lot for the game. Coming down into Stamford by way of Route 106: After turning right at the stop sign after the Holmes School, onto Glenbrook Road, continue straight—don’t turn left—until after you cross the railroad tracks. You’re still on Glenbrook Road. Follow it up the hill until you come to the light, then turn right and make your first left (onto Wetzel) and go down the hill. You’ll see the parking lot ahead and to the left from the stop sign at the bottom.

One thought on “Turkey Bowl Essentials: A Breakdown of the New Canaan-Darien 2015 FCIAC Championship”