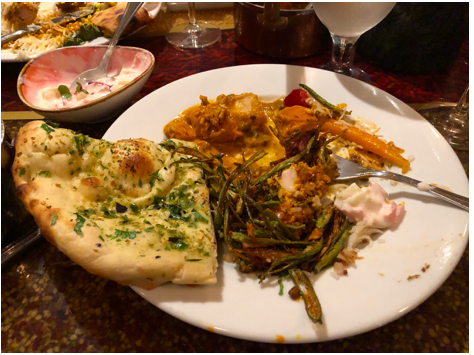 A plate loaded down with fried okra, garlic naan, and various other of Chef Prasad’s offerings. Seriously, don’t let the quality of this food photography deter you from the magnificent experience of dining at Chef Prasad. Credit: Andrew Ault

Takeout Indian food can definitely hit the spot, especially for HBO-and-athleisure nights, but today I want to make a case for the undeniable magic of dining in.

American diners in big cities tend to relegate a lot of Asian (including Indian) food to delivery and takeout nights, never stopping into a restaurant enough to know the waitstaff, the artwork, and the soul of the place. GrubHub and Uber Eats make it easy enough (at an unfortunate cost to the restaurant) to never set foot on the block where you get your Pad Thai.

In the case of restaurants as uniquely and carefully realized as New Canaan’s Chef Prasad, this is where we all go wrong.

When Andrew and I first moved here four years ago, we were tipped off by our real estate agent that Thali, Chef Prasad’s first New Canaan restaurant, was excellent. Coming from Manhattan, we weren’t sure if she was just painting an extra-glowing picture of this darling small town’s restaurants like any good real estate agent should, or if this really was the real deal. We ordered in from Thali, and upon tasting the glorious Saag Paneer, we realized that the real deal was actually here, in an unprepossessing former bank building. What chance! What luck! 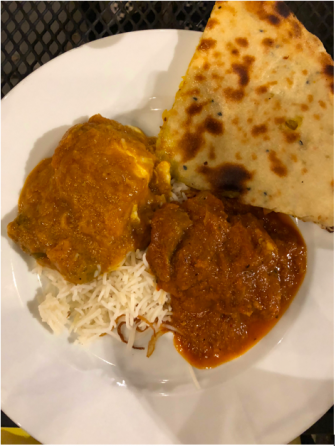 It’s not just luck, though. It’s the earnest passion of a chef who, despite Thali’s untimely closing, has (twice) rededicated his team’s worldly talents to cooking for New Canaan. Buoyantly, he reopened his restaurant under the broader moniker, “India,” in a space up the street a few months later. India was just as delicious, in a cozier space, but still, we never exactly made it inside the place. It was delivery and Uber Eats all the way. We were sad to see it close, but only in the hopelessly sad way that one can have when one knows one hasn’t really done all that one could to keep it open. It’s a certain kind of sadness, one that I will name “New Canaan Guilt.”

We can now take a moment and acknowledge that we’ve all felt New Canaan Guilt quite a bit lately. And we can also take a moment and realize that dedication to a small town means an earnest effort to support the places that make it as charming an unique as it is. My husband and I know where we’ve failed on that front, and we earnestly try to do better at it all the time. Market forces being what they are, and commercial real estate in this town being what it is, I want to move on to the food. Because the food, in this case, is spectacular. 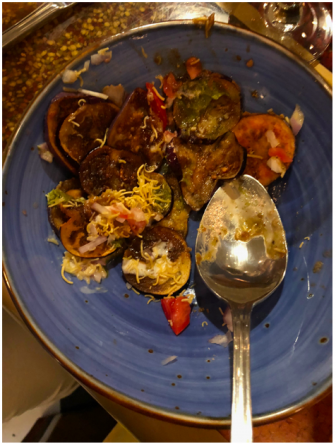 A photo that will never do Chef Prasad’s Eggplant Chaat any justice. Credit: Andrew Ault

Andrew and I dropped in on a Thursday night in September because, after months of ordering in from Chef Prasad, we wanted to support his latest venture in person. Temperatures had just dropped from the “buggy and stifling” range to “super pleasant for sitting outside,” and we chose to do just that, forgoing the admittedly striking dining room painted in a hydrangea-blue-and-white Tree of Life motif. Settled under piazza lights and looking out at Town Hall, we ordered a fairly priced white Burgundy.

Before we’d even dug in to the menu, a gift appeared: crispy papadam and translucent shrimp crisps with three chutneys—tamarind and mint were well-executed Indian classics, and diced onions in a tangy, smoky glaze was the mysterious newcomer.

The appetizers we ordered were prompt and perfect. Eggplant chaat ($9) came fried to a crisp precision under a spicy kind of salsa cruda of tomato, red onion, green chutney and some tiny crunchies from heaven that I would like to imagine are dollhouse-sized ramen noodles. This dish was like nothing you ever get to eat in real life, and it wouldn’t have made the delivery journey intact. Crunchy, magnificently so, but was zingy and tart and nicely sauced. With all the onions we were eating, it wasn’t exactly first date food. But since we’re on our three thousandth date, we cheered and moved along. The Konkan Crab ($17) was a happy contrast: walnut-sized chunks of crab in a warm and creamy, cardamom-and-curry-leaf sauce. Imagine that your great aunt’s hot crab dip spends a semester abroad on the subcontinent and comes back more worldly and original. We used our papadam to greedily scoop it up. 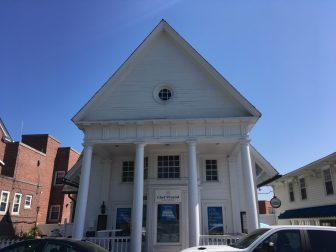 Clearly, this was an appetizer course that required a short breather afterwards. Andrew and I had agreed to only order dishes we hadn’t gotten as takeout, thus canceling any hopes of our favorite, tender chicken tikka kebab and velvety daal makhni. The menu abounds with gluten-free and vegan options, which is part of the beauty of Indian cuisine, but I believe in Naan. Our waiter recommended the fresh halibut (market price, which I believe was around $20) which we ordered served Chef Prasad’s “Mom’s curry” style (who could ever turn down an ode to Mom’s cooking?) which means mango, shishito peppers, turmeric and tamarind. We also ordered lamb vindaloo ($20) because something about blistery-hot spiced lamb and potatoes sounded like it would go perfectly with white wine and sitting outside. 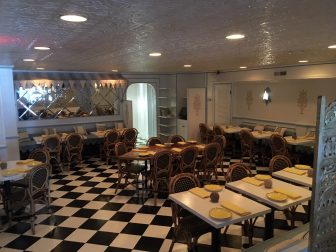 Both dishes appeared after a suitable interval in long-handled, hammered metal serving dishes alongside some long-grain basmati rice topped with crispy shallots. Here is where the true departure from delivery takes place, and here is the moment I’ve been missing out on while consuming my Indian food in front of the TV for 20 years. Indian food right off the stove, with its complex, labor-intensive blend of spices, ground and toasted in clarified butter, is warming and transcendent. But by the time it arrives at your house, there’s always a suspicious bead or two of reddish oil at the top that knocks that off-kilter, and makes you feel, at the very least, due for a double-Peloton tomorrow. When you eat Indian food fresh at the restaurant, as the kitchen has intended, the proteins, oil and spices hang together in the balance they’re meant to, sensorial and warm, over fluffy rice or, better yet, crispy, cloud-like naan. Will you still need to double up on your cardio tomorrow? That’s between you and your own 10,000 gods.

We sat under a balmy New Canaan night, earning some legit vindaloo sweats as we talked and ate, enjoying the flakiness of the fish, the cold white wine, the brightness of the lamb, and everything that surrounded it. Sitting on Main Street, with Town Hall standing quiet in front of us and gleaming red fire trucks behind us, it felt like we were getting a chance to appreciate exactly what we came to New Canaan for: a unique town with character and charm, history and authenticity. Like Chef Prasad, New Canaan is the real deal.

As creatures of habit, we’re all entitled to our own rituals, and sometimes, takeout and the couch is precisely what a Tuesday night needs. As for us, one new weeknight ritual is to show up in person for the places and the people we’re most grateful for.