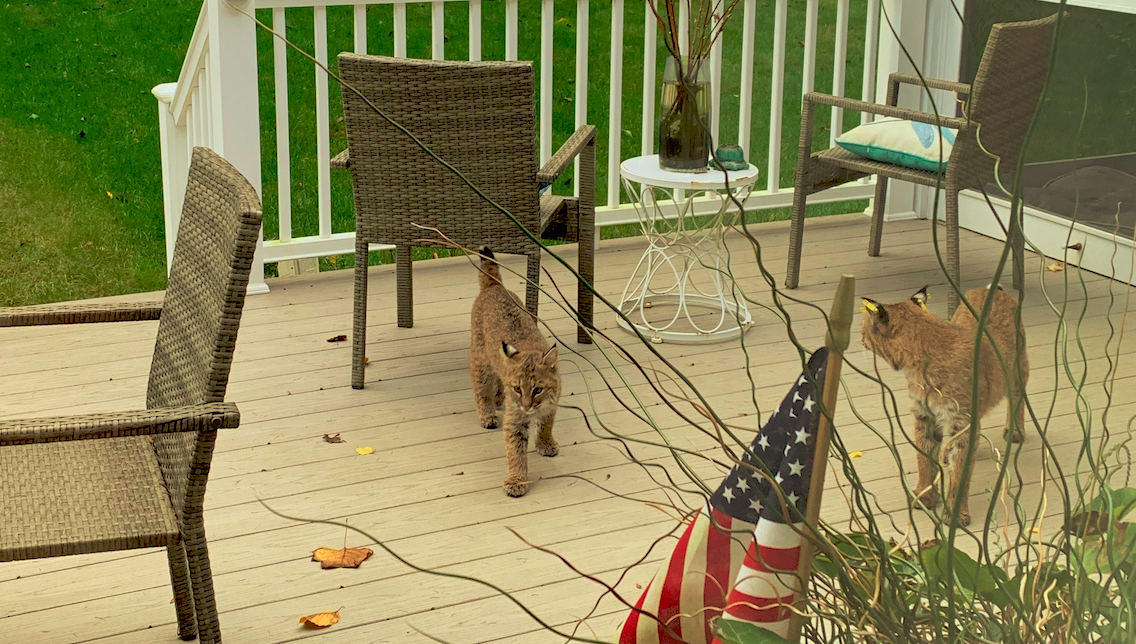 A new photo of two bobcats casually standing on the deck of a New Norwalk Road home has town officials concerned about the animals’ welfare.

Taken at a residence near Route 123’s intersection with Carter Street, the photo of what appears to be an adult bobcat and kitten indicates that “they are way too comfortable getting that close to a dwelling,” according to Animal Control Officer Allyson Halm.

“I have real concerns and I want to put it out there that feeding the wildlife is wrong and dangerous and sort of a death sentence for these creatures,” Halm told NewCanaanite.com. “We cannot have them hanging out on a deck.”

She added, “I have real concerns that people are feeding these cats and that is a big mistake.”

The homeowner who took the photo is not feeding the bobcats, Halm said. That homeowner said the animals weren’t scared away even by an air horn and “just sauntered off” when usually hazing techniques were used, she said.

Separately, home surveillance video on nearby Beech Road captured a bobcat walking past the residence before dawn Monday, according to footage shared by the homeowner.

Bobcats began to appear with more frequency in New Canaan around 2014, and since then Halm has said she’s seen what appear to be families of bobcats establishing dens here. Twice last year—in January and December, a pair of the normally reclusive animals were photographed on Marvin Ridge Road properties.

They’re most active after dusk and before dawn, officials. Bobcats make dens from which they may travel up to four miles per day.

She said New Canaanites should be aware that breeding season is near, for wildlife that will be born next spring. It’s rutting season for deer, as well as bow and arrow hunting season, which keeps wildlife on alert, “so we should see a little more activity,” Halm said.