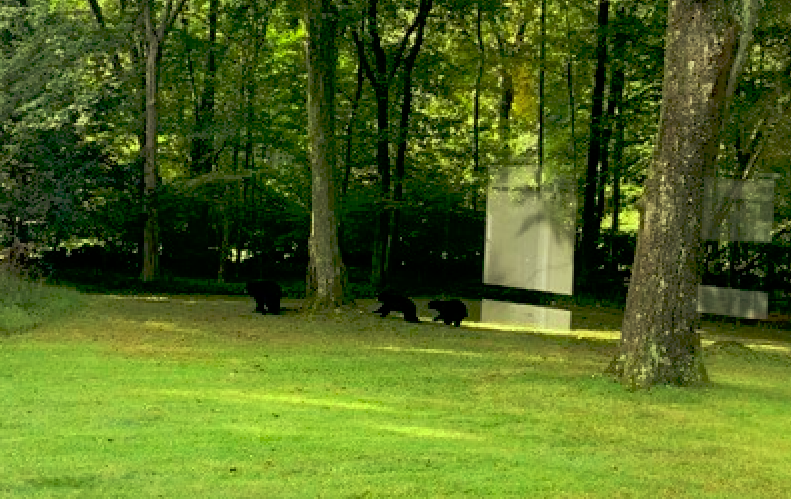 A mother black bear and two cubs were seen on the morning of Oct. 7, 2021 on a Father Peters Lane property. Photo courtesy of Animal Control

A mom with her young ones “could be a little more protective” than black bears normally are, according to Animal Control Officer Allyson Halm.

“We certainly want to keep our distance but do make noise and try to get them to move along quickly,” she said. “And if you see any animals please call in your dogs.”

Halm has said New Canaan is seeing an increasing number of black bears appear each spring. The first reported bear sighting of 2021 came in June, on Briscoe Road. That same week, a black bear showing state tag number ‘211’ on his ears could be seen devouring a young fawn near a Logan Road bus stop.

The presence of a family of bears could pose new problems, Halm said.

“It sort of concerns me that now do we have a breeding bear in our area or did she just wander down here with her cubs?” she said. “It’s one thing when they’re passing through. It’s another when you think they’re residing with us, as the coyote and bobcat do. We know they breed and live here. Breeding season is approaching. It’s rutting season for deer, which keeps them very active. And it is also hunting season, bow and arrow hunting season, which keeps the wildlife on alert. So we should see a little more activity throughout the season.”

Black bears typically breed in late June or early July, according to the state. During that time, males travel extensively in search of females. In New Canaan, bear sightings are reported to police all throughout town. Black bears eat grasses, forbs, fruits, nuts and berries, and also will seek insects—particularly ants and bees—scavenge carrion, and raid bird feeders and garbage cans. Bears occasionally will prey on small mammals, deer and livestock, state officials say.