The town on May 11 received an application for the owner of the Huguette Clark estate on Dan’s Highway to build a tennis court on the 52-acre property. The 120-by-60-foot court will cost $98,750 to build. The contractor on the job is Oval Tennis Inc. of Somers, N.Y., architect Frangione Engineering LLC of New Canaan. 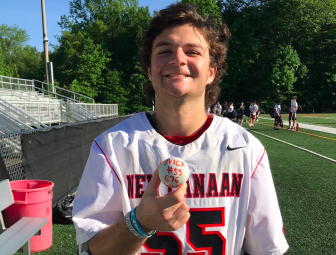 Congratulations to New Canaan High School senior lacrosse player Nick Crovatto, who broke a longstanding Rams record Monday in a game vs. Trumbull with his 676th faceoff win. The Bucknell-bound FOGO (Face Off and Get Off) broke a record that had been held by legend Andy Towers, a member of the NCHS class of ’87, CT Lacrosse Hall of Fame inductee and two-time first team All-American at Brown.

Animal Control officials are interested in finding the identity of a woman who let two dogs run loose outside of Spencer’s Run, knocking over a 3-year-old child who became frightened. The woman id scribed as a white female, not tall, with dark brown and gray hair. The dogs were brown mixed-breed with long coats. It happened on Saturday, April 28. 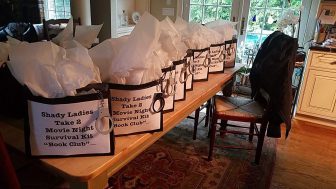 We’re hearing that “The Shady Ladies”—a group of New Canaan women founded three years ago to enjoy “50 Shades of Grey” with “goodie bags” that included movie-themed “toys” (ahem)—convened again last week to watch “Book Club” at The Playhouse on Elm Street. The new movie is about four lifelong friends (played by Diane Keaton, Candice Bergen, Mary Steenburgen and Jane Fonda) who are “turned upside down” after reading the “50 Shades” book and then make “a series of outrageous life choices,” according to its promo material. The local Shady Ladies may include women whose initials are AV, JE, TM, HK and JD (one of those set of initial is probably reversed), and they had all-new goodie bags (photo at right).

The Board of Selectmen by a 3-0 vote on Tuesday approved the appointment of Carl Mason as a member of the Parks & Recreation Commission for a term to expire December 1, 2020, replacing Katie Owsley. 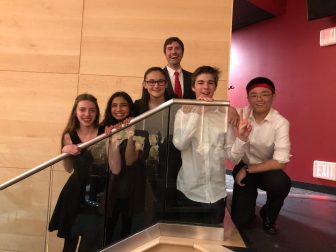 Congratulations to Saxe Middle School 8th graders Clara Bloom, Parisa Aratsu, Mia Konidaris, Max Koon and Alex Hsu who performed in the concert choir at the spring 2018 Connecticut Western Region Middle School Music Festival held at Wilton High School. The students and their families offer sincere thanks to Saxe choir director Trevor Leckie who coached the group for auditions and in preparation for the concert.

A Harrison Avenue man with a den of foxes under his shed decided to forgo mowing his lawn to ensure he wasn’t disturbing the wildlife. The fox family includes four kits, and the Animal Control section of the New Canaan Police Department heard about them after residents there reported “a screaming fox” (the animals likely were communicating with each other). A family at the bottom of Farm Road also has reported a family of foxes, according to Officer Allyson Halm, head of Animal Control. And residents on South Avenue at Brooks Road suspected foxes were involved when they found a decapitated rabbit, but that likely was an owl, she said.

On Monday, another New Canaan homeowner filed with state Superior Court objecting to the town’s March 20 decision to leave unchanged an assessment of their property. Attorney Jonathan Hoffman of JTHoffman LLC filed on behalf of Ori and Rebecca Bukai, whose property at 260 Lukes Wood Road was appraised last year at $3,576,300.

The Board of Selectmen on Tuesday also approved the formation of an ad hoc Waveny House Renovation Advisory Committee that will review plans for a renovation project at the cherished public building that’s designed to make it ADA-compliant. The committee’s members will be: Bill Holmes (chairman), Sally Campbell, Amy Murphy Carroll, Carl Rothbart, Cristina Ross, Marty Skrelunas and Penny Young.

Police after midnight Sunday cited a 19-year-old Stamford man for possession of less than .5 ounces of marijuana, possession of drug paraphernalia and failure to obey a traffic control signal after stopping his car for running a light at Locust Avenue and Route 123.

Animal Control has cited two New Canaan residents with two dogs apiece for failure to license, which carries a $75 fine. In each case, multiple letters were sent as a reminder, among other measures. Renewal for licenses starts June 1. “I request you do not ignore a certified letter” from police, Halm said. 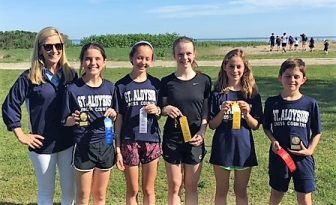 The annual 4th to 5th Grade Transition Night will be held on Friday, June 1st, from 5 to 7:30 pm at Saxe Middle School. All current fourth graders from East, South, and West Elementary Schools have been invited to attend during the assigned time periods. The visiting 4th grade students and their parents will be welcomed by current 5th graders who will serve as tour guides and pizza servers. The training of the tour guides is overseen by 5th Grade Principal, Dr. Steven Clapp, plus 5th & 6th Grade Counselors, Sam Bachman, Liz Reynolds, and Christine Risoli, and teacher, Caitlin Portanova. The evening will be capped off with a DJ and Baskin Robbins ice cream on the back playground. Pizza has been generously donated by local, family-run business, Joe’s Pizza. For any questions, please contact event co-chairs, Suzanne Harrison, Meg Saunders, and Lisa Sutton at saxeptc@gmail.com. 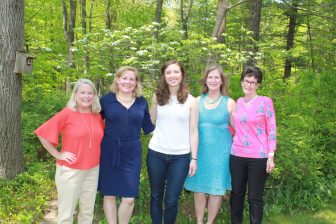 New Canaan PEO Chapter N announced the winner of this year’s Scholar Award, Veronica Galvin. Originally from Seattle, Galvin is a third-year candidate for a Ph.D. in Neuroscience at Yale where she has performed at the top level by earning Honors (the top grade) in all her coursework, and by receiving the Neurobiology of Cortical Systems training grant, which Yale awards to just 3 students per year. Her faculty member, Amy Arnsten, asked her to help create training content for first year medical students about the prefrontal cortex, which will be available to medical schools across the country.

The Building Department on Tuesday issued an after-the-fact permit for an estimated $11,700 roof job done at 76 Harrison Ave. “The entire roof was done without having the required ice & water shield inspection performed,” the permit said.

Finally, Animal Control on May 17 rescued a red-tailed hawk found roadside and unable to fly in the area of 1450 Oenoke Ridge Road. The bird went to a rehab center in Wilton.