The original 1913 building will be incorporated into New Canaan Library’s widely anticipated rebuilding project so long as the Planning & Zoning Commission has received and approved a “viable and funded” plan for its preservation, according to a draft agreement between the library and town. 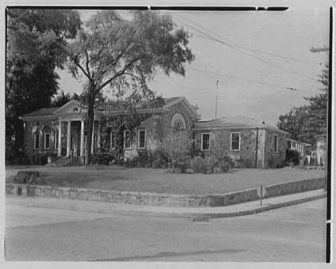 New Canaan Library was built in 1913.

The library and town both acknowledge that the estimated $35 million project calls for demolition of the stone-exterior structure “and that a group of concerned citizens has expressed interest in preserving the 1913 Building,” according to a copy of the “Public-Private Partnership Agreement” obtained by NewCanaanite.com. 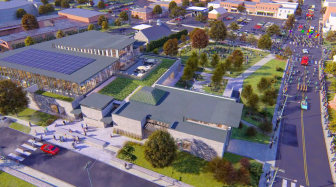 Officials have said construction of the new library will commence this spring and continue for about two years.

Though demolition of the existing building—limited by its failing, costly physical plant, among other structural problems—always was going to wait for the new library to go up, the wording in the draft agreement represents the first time that a plan for preservation of the 1913 structure has been formally spelled out. NewCanaanite.com last year filed a public records request for the draft agreement that the town denied, a decision subsequently appealed to the Connecticut Freedom of Information Commission (the appeal has not yet been heard).

First Selectman Kevin Moynihan during a budget hearing in January referred to the need for those seeking to preserve the 1913 building to come up with a formal use and funding for it. Library officials have said the building doesn’t fit into plans for a future facility that best serves the community, and have planned for a green space overlooking Cherry and Main Streets while offering that those who want to preserve the building can plan for and fund its relocation. Those advocating for preservation of the building say it’s historical and important to New Canaan’s character and heritage.

The draft agreement calls for the town to contribute $10 million toward the rebuilding project. The library so far has raised $16 million in pledges and gifts, it said. The agreement also includes notes on the project, such as that the Planning & Zoning Commission is to approve a parking plan, use of 76 spaces in the Center School Lot for library patrons for an annual fee to the library that starts at $10,000, makeup and responsibilities of a building committee, appointment of ex-officio members from town government to the library’s Board of Trustees, indemnification and insurance.

A special meeting of the Parking Commission is scheduled for 2 p.m. Monday regarding use of the Center School Lot.

Monday regarding use of the Center School Lot.

8 thoughts on “Draft Agreement Between Town, Library: ‘Viable and Funded’ Plan for 1913 Building Will Forestall Demolition ”