A woman in northeast New Canaan who had lost power and had no cell phone coverage on Saturday drove away from a suspected fire at her Bob Hill Lane house to find help from emergency responders, officials said. 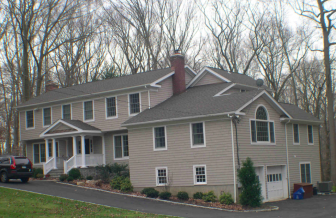 Fortunately, she came across New Canaan firefighters on nearby Laurel Road, where a tree had fallen on power lines, and told them about the emergency at her house.

“Firefighters immediately radioed communications to dispatch for a structure fire and responded to the scene,” Fire Marshal Fred Baker said in a release.

The first arriving units found a shorted surge protector. The suppressor strip itself was destroyed, according to Fire Chief Jack Hennessey, and fortunately the fire did not spread beyond it. The home where this happened is a wood-shingled 1965 Colonial, tax records show.

Apparently, when the power went out there was a surge that caused the short circuit, according to Baker. There was a light smoke haze in the room with the device.

Selectmen Nick Williams is describing the incident during a regular meeting of the Board of Selectmen on Tuesday said, “This is another case of poor cell coverage in town could have contributed to a more serious incident. So for those folks who don’t think it is critical that we improve our cell coverage in this town, you are wrong.”

Baker urged homeowners to have a “UPS” or “un-interrupt-able power supply—a battery back-up—for Internet-based phone systems, especially for areas where there is limited or nonexistent cell service.  The problem may also extend to home security and fire alarm system, Baker said, and homeowners should check with their alarm companies for redundancies.

For further assistance regarding this issue please contact the New Canaan Fire Marshal’s Office at 203-594=3030.