A haunting documentary about the March 1964 murder in Queens, N.Y. of Kitty Genovese—eldest of five kids in a family that lived in New Canaan at the time—is now available on Netflix. “The Witness” (see trailer above) tracks younger brother Bill’s quest to unearth details surrounding the pre-dawn stabbing murder, which reportedly was witnessed by 38 people and became synonymous with bystander apathy. 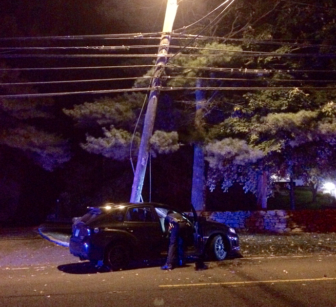 A vehicle struck a utility pole on Weed Street near the intersection with Knapp Lane on the night of Oct. 10, 2016. SE photo

A motor vehicle struck a utility pole on Weed Street on Monday night. At 9:28 p.m., emergency responders received a notification about the collision in the area of 202 Weed St. (just at the intersection with Knapp Lane). It came through as a motor vehicle accident with injuries. It was not immediately clear how many people were in the vehicle involved and what was the extent of the injuries. Police closed traffic on Weed Street in the area for a time early Tuesday while the utility company repaired wires. It reopened to a single lane of traffic at about 6:30 a.m.

The hopeful developer of the Roger Sherman Inn site tells NewCanaanite.com that he has modified plans slightly, now proposing seven rather than eight living units on the Oenoke Ridge Road property:

The woman who named the town in a lawsuit filed recently—two years after she tripped on a stair at Outback Teen Center, fell and got hurt, saying it was caused by negligence—was wearing high heels at the time of the accident, according to an incident report.

David Liebenguth, the Cos Cob man who hurled racial slurs at a New Canaan parking enforcement officer after getting a ticket at Morse Court in September 2014 has been sentenced for his guilty convictions of breach of peace and tampering following a trial in Norwalk Superior Court. He was fined a total of $4,000 (the original ticket was for $15) and 4.5 years in jail, execution suspended with a total of six years’ probation, according to Connecticut Judicial Branch records. 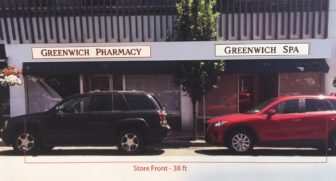 A rendering of the new ‘Greenwich Spa’ sign to go in at Greenwich Pharmacy at 110 Main St. in New Canaan.

The Planning & Zoning Commission at its special meeting last week by a 6-1 margin approved a new ‘Greenwich Spa’ sign for the business at 110 Main St. That’s Greenwich Pharmacy, open since February, a retailer that also offers spa services. The lone ‘Nay’ vote was cast by Kent Turner, according to a voting record published online. Turner also had been vocal at the time of the originally proposed sign for the pharmacy. 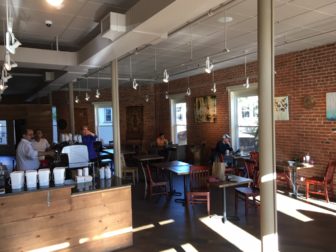 The second installment of “Coffee with a Cop” will be held on the morning of Friday, Oct. 21 at Kaahve on Main Street. Come say hello to members of the New Canaan Police Department in an easy, informal conversation.

The Animal Control section of NCPD issued a $92 ticket to a Skyview Lane resident whose older, male golden retriever was found roaming on Ponus Ridge at 2:23 p.m. on Sept. 16. Officials already are familiar with the dog, who has roamed his neighborhood before. The front door at his house was found to be open, according to a police report.

A mandatory watering ban remains in effect for New Canaan. 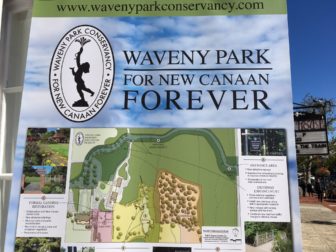 A limited number of tickets at the $250 level remain available for the widely anticipated Tailgate party, the first annual fundraiser of the Waveny Park Conservancy. No tickets will be sold on the night of the event, and there are no walk-ins. The event will feature Joe Scarborough’s band Morning Joe Music.

The following servicemen and women on the “prayer list” compiled by the Interfaith Council of New Canaan. Spearheaded by Donna James of the United Methodist Church at church member Carol Bauer’s suggestion, the list is distributed to 13 local houses of faith, which come together to pray for those serving. “The prayer list project is an ecumenical endeavor that is intended to include those with no church affiliation as well as those who are affiliated with a faith-based community,” according to the council. Those interested in supplying a name can reach James at redbjames@gmail.com: 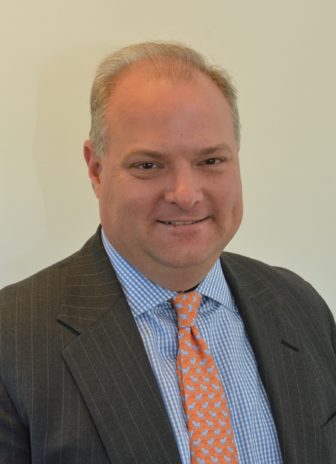 Peter Olson has joined Bankwell as vice president, branch manager of Bankwell’s New Canaan offices at 208 Elm St. and 156 Cherry St., according to David Dineen, Bankwell executive vice president and head of community banking. Olson has spent the majority of his last 14 years in banking sales, branch management and customer relations at local banks including Darien Rowayton Bank, Webster Bank and First County Bank. He also is very involved in the Darien community, where he lives with his wife and three children. He currently serves on the Board of Directors for the Darien Chamber of Commerce and on the Board of Directors for The Tiny Miracles Foundation, a Fairfield County based organization that works with and assists families with children born prematurely. He graduated from the University of Wisconsin at Green Bay with a bachelor’s degree in history.

Finally, here’s a gallery of other newsworthy items from around town: 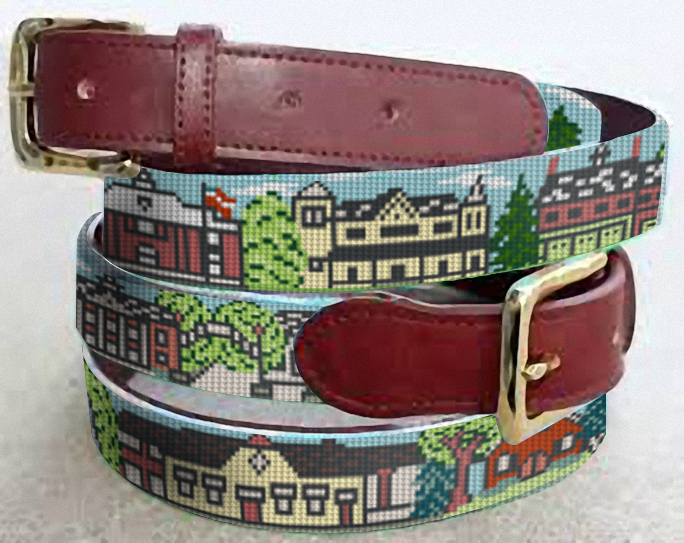 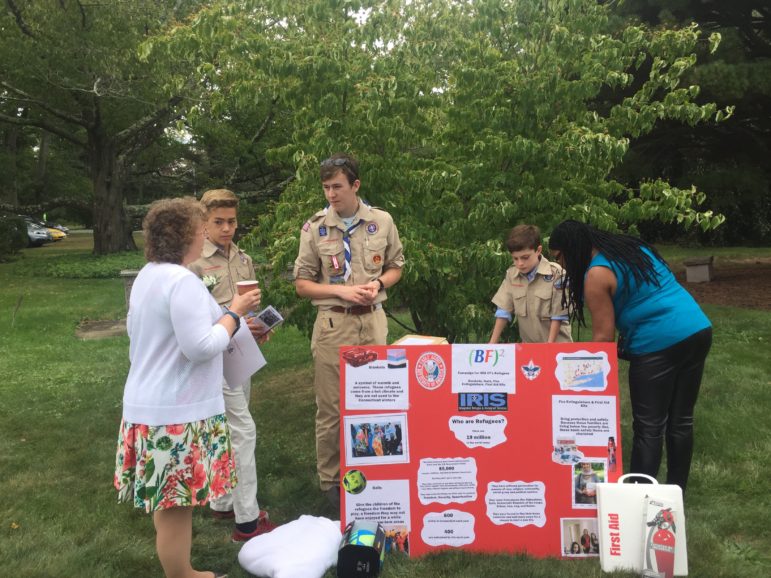 Spencer Reeves, a junior at New Canaan High School and a member of New Canaan’s Boy Scout Troop 70, has launched his Eagle Scout Project, and there is an opportunity for the whole community to get involved. Spencer is leading an awareness campaign and charitable drive for Integrated Refugee & Immigrant Services (IRIS) of New Haven, a faith-based organization that—with the help of the State Department—coordinates the bulk of the refugee relocations into the state of Connecticut. You can help by being a “BF” and donating any or all of the items above. Spencer and his fellow Scout volunteers have set up collection boxes at several locations in town for blankets, balls, first-aid kits and fire extinguishers: New Canaan Library, First Presbyterian Church, New Canaan United Methodist Church, St. Aloysius Catholic Church, St. Mark’s Episcopal Church, St. Michael’s Lutheran Church, and the Congregational Church of New Canaan. Boxes will be out through October 23. To learn more about the refugee crisis and IRIS’ work in Connecticut, please visit IRIS at www.irisct.org.

Tom Roscoe, Ryan McLallen, and Gospel Garden director, Margaret Roscoe, joined members of the St. Mark’s Episcopal Church 7-12 Youth Group to help harvest fresh vegetables from the church’s Gospel Garden. The efforts resulted in a delivery of more than 90 pounds of fresh produce to Person to Person. The St. Mark’s Youth Group is open to all kids from 7th to 12th grade. They regularly come together as a group of people of faith to engage in service projects and social activities.

From Jul at Jul's Salon on Cherry Street: "I am excited to let you know that during the month of October Jul'Salon will be in partnership with Gingerbitz, we will be running a Pink Pumpkin event in honor of all women that have lost their lives or are currently living with breast cancer. Most of you know that in June 2013 I was diagnosed with stage 4 colon cancer. The diagnosis was truly shocking to me as I was a very healthy individual. I went through surgery and intensive chemo and despite all challenges and all the unknowns, I remained optimistic and committed to beating cancer. During my cancer journey I met amazing people and I became friends with wonderful souls called nurses and I was lucky enough to be treated and supported by the incredible doctor Ruskin at Norwalk Cancer Center. I have been cancer free for three years and I am so grateful for this new lease in life, for being in this earth with my family. The incredible advances in cancer treatment and medicine in general are achieved through research and patient support. And that’s exactly what Jul’s Salon and Gingerbitz are trying to do during the month of October: raise funds for breast cancer research. Our goal is to raise $3000 to provide healthy snacks and any other necessities directly for chemo patients at Norwalk Cancer Center on their journey. Come in and get a free pink hair extension any day during October and help support breast cancer patients! Gingerbitz will be selling pink cookies and all proceeds will be donated to this wonderful cause. Our help goes a long way and we look forward to seeing you."

On Saturday, October 8, New Canaan residents Karl and Andrea Reinhardt led Team E to raise over $40,000 to support the Shatterproof Rappelling Challenge fundraising event in Stamford. Team E is named in loving memory of Evan “E” Reinhardt, who succumbed in July of 2015 to a heroin overdose. Evan was a 2009 graduate of New Canaan High School. Karl and Andrea rappelled 22 stories down the side of Beacon Harbor Point in Stamford, during an event that raised awareness and funds to fight addiction. The urgency of this fight is more important than ever, as the number of opioid deaths in Connecticut continues to climb. Congressman Jim Himes, in showing support for the cause, rappelled down the building about 30 minutes behind Team E. Shatterproof was founded in 2013 by Easton resident Gary Mendell, and has offices in Norwalk and New York City. It is a national organization with key initiatives to fight addiction on several fronts. The funds raised will enable Shatterproof to develop effective, evidence-based prevention, treatment, and recovery programs, and continue its public policy advocacy. The event was the 44th Rappelling Challenge held by Shatterproof, since its formation. Standing, from left to right, are Karl and Andrea Reinhardt. For more information about the Stamford event and Shatterproof, go to www.rappelstamford.org and www.shatterproof.org. 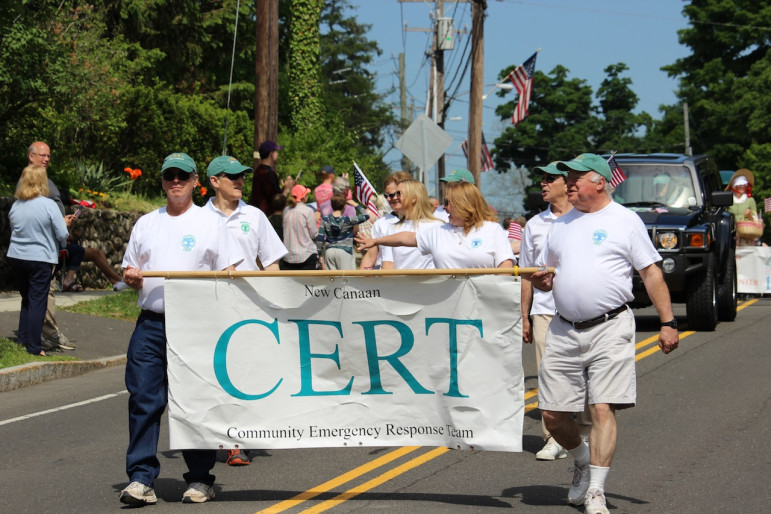 Are you prepared for a big storm, or other natural disaster that could impact you at home, work, or while travelling? If you were without power for 5 days, would you be in a good position to live in your home, stay nourished, and prevent injury? If not, learn how you can be better equipped to handle a disaster in your home or workplace. With training, you can make sound decisions and take the appropriate actions to minimize the impact of a disaster. New Canaan residents can enroll in a 20 hour disaster preparedness program, developed by FEMA and supported by the Dept. of Homeland Security. The program is called Community Emergency Response Team (CERT), and trains citizens to be better prepared to deal with major disasters and acts of terrorism. After the training is completed, CERT graduates can become part of New Canaan’s emergency deployment pool, and help the town’s first responders in the event of a disaster. CERT members are also deployed at special events, when extra resources are needed for public safety. The next Basic CERT training course will begin in October, with classes on four Wednesday evenings (Oct. 12, Oct. 19, Oct. 26, and Nov. 2) from 7 PM to 10 PM, and two Saturdays (Oct. 22 and Nov. 5) from 8 AM to noon. Registration for the free, six-session course is required. To enroll, please go to the New Canaan CERT website at www.newcanaancert.org to find the registration forms. Questions can be directed to certleader@newcanaancert.org.