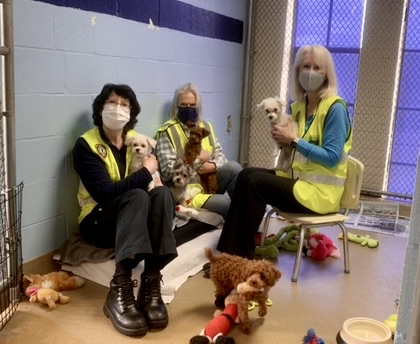 The head of the New Canaan Police Department’s Animal Control section is thanking dozens of local volunteers and businesses that donated time, energy, goods and services to ensure the health and comfort of 12 neglected dogs seized in November from a Butler Lane home. 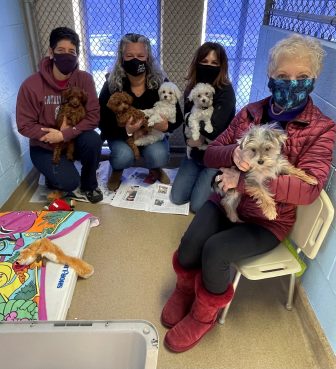 Volunteers from the Connecticut Humane Society in Westport. Contributed

Following a lengthy court dispute with the dogs’ former owner—a woman who still faces three counts of felony cruelty to animals in an ongoing criminal case—the town on Jan. 20 was awarded full legal custody of the 10 puppies and two adults dogs.

A 20-day appeal period expired Feb. 10, Officer Allyson Halm said, and the puppies became “free and clear” to be placed “in safe places.”

“It was an emotional roller-coaster for me. It definitely took its toll, because I felt such responsibility and I wanted these puppies to have 10 times better care than they’ve ever seen in there lives. And we did that. I am so proud of this group.” 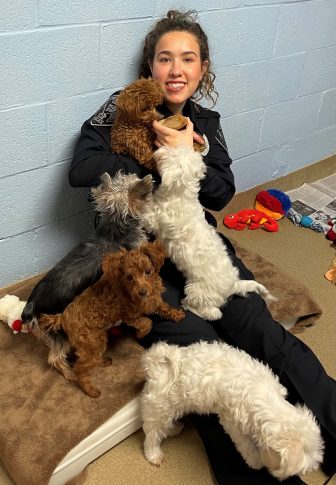 Referring to New Canaan’s animal shelter, Halm continued, “We literally had someone in that building almost every two hours. The longest stretch would be when [New Canaan Police Officer Annamaria] Ceci would go in at 10 at night and then me and other volunteers would be there at 6 a.m. These puppies had almost constant care for their cleanliness, socialization and entertainment, and that was a huge commitment for almost three solid months, seven days a week. The snowstorms were a bit stressful—we relocated them over night, just so there was no stress, and two of them were brought to VCA [Veterinary Referral and Emergency Center in Norwalk] who kindly cared for them free of charge.” 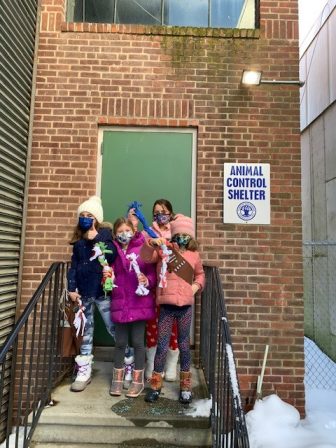 Fitzgerald, a CERT member for about four years, has two of her own dogs and said that when the organization’s executive director, Stuart Sawabini, told her about the dogs who had been abused that she was “thrilled to get to do something for them and just figure out what we needed to do to help out.”

“I miss them, but I am thrilled that they have good homes and they are being taken care of,” Fitzgerald said. “And that they are looking so healthy and happy compared to when they got to us. They are great dogs, really wonderful dogs, and it was a pleasure spending time with them.”

Asked about Pet Pantry’s interest in supporting the neglected dogs, Adam Jacobson, the company’s executive vice president, said in an email, “As a local family-owned, community-based business, that has served the Fairfield and Westchester County community for over 75 years, we understand the importance of helping where we can. We have a strong relationship with the NCPD animal shelter, along with others, so when they reached out for support we met the need with what we could provide during these challenging times. We are grateful for the support from our customers as each one of their purchases help us make an impact in the community.”

Police launched an investigation last August based on a tip from a tenant in Catherine Palmer’s Butler Lane home that the 12 dogs there were being neglected. They learned weeks later that two puppies at the house died of parvovirus and that a third also died and was buried by one of the tenants in the back yard. Police say that Palmer has been operating an illegal puppy store. She has pleaded not guilty and is scheduled to appear March 10 in state Superior Court. She’s out on $10,000 bond and, despite court-imposed restrictions on the puppy business, Halm has said that she continues to receive calls from distressed people throughout the United States who are purchasing puppies from Palmer. 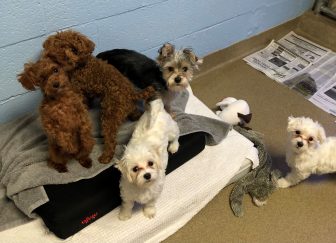 The puppies at the animal shelter. Contributed

Those who adopted the rescued dogs have chosen to remain anonymous, Halm said.

After the trauma of their early lives, the animals—now older puppies—each have a “steep learning curve” to become normal pets, she said.

“They hadn’t felt wind or touched grass,” Halm said. “They were barely leashed and collar-trained. They were so conditioned and controlled and then they came into this structured lifestyle in one building, with very little exposure, for all the care that people gave them.”

5 thoughts on “‘I Am So Proud of This Group’: Animal Control Officer Thanks Volunteers as Neglected Dogs Are Safely Re-Homed”