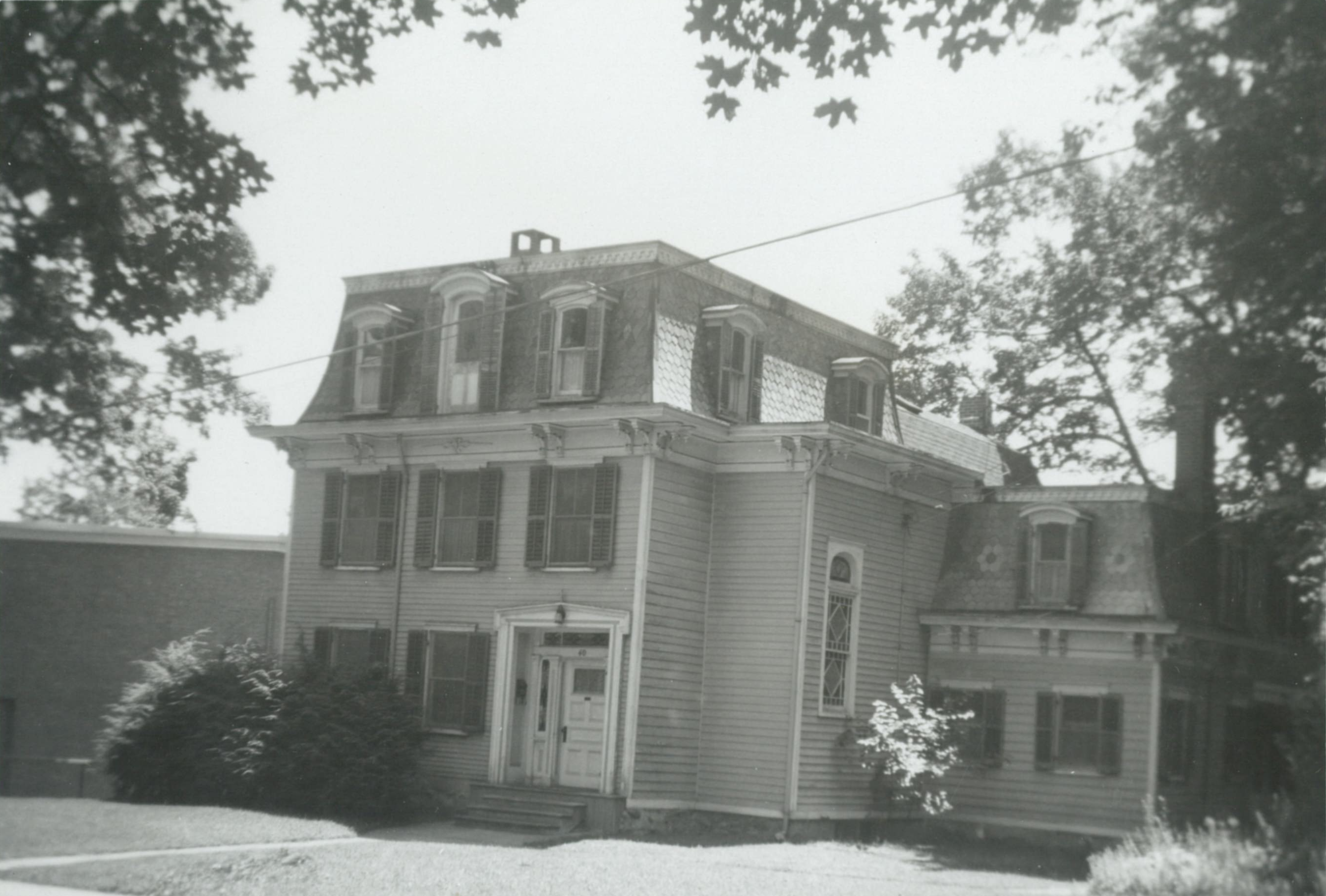 Today features the home of George F. Lockwood located at 40 Cherry Street. The first time the house appears in town records is in 1849, when it was bought by Charles Benedict from Hezron Ayres.

There is no mention of when the house was built or who owned it first. Hezron manufactured shoes in New Canaan at his shop on Brushy Ridge. In the 1830s, while his fellow manufacturers could only afford to pay their workers with drafts on the local general stores, Hezron paid his 46 employees in cash. Despite this success, his business eventually failed in 1851.

Following Ayres, the next owner of the house, Charles Benedict, was another shoe manufacturer.  He was a partner in Benedict, Hall, & Co. located on the corner of Main and Locust Street where the firehouse now stands. (This building was the subject of a previous “Now & Then” article back in February.)  Charles was also one of the founding members of the First National Bank of New Canaan (originally housed in the vacant building next to Town Hall), as well as the New Canaan Historical Society. When Charles passed away in 1899, 40 Cherry Street was given to his son Charles S. Benedict. It does not seem that Charles S. ever lived in the house. Instead, it was occupied by his sister, Emma, and her husband, George F. Lockwood. Charles S. lived across the street in 26 Cherry Street, now the site of William Pitt Sotheby’s International.

Thinking about advertising on the New Canaanite? Ask us about a package that includes sponsorship of our local history feature, “Now & Then.”

Born in Stamford in 1849, George Lockwood led an incredibly active life. In his twenties he was part of a survey team that went out west to St. Cloud, Minnesota, to plot out a potential railway for the Northern Pacific Railway. Later, he toured with George F. Bailey, a relative, for a year as the treasurer of Bailey’s circus. The next year Bailey combined his circus with that of P.T. Barnum in order to form the Barnum and Bailey Circus.

George and Emma were wed in 1878 here in New Canaan and the couple moved out west. After a few years away, they moved back to 40 Cherry Street. The interior photos of the house are from George Lockwood’s album of photographs that he took from 1907 to 1909. Soon after his return to New Canaan, he became president of the First National Bank that his father-in-law established, serving for fifteen years earning the nickname “Bankie.” Lockwood also went into a partnership with his brother and the two established Benedict & Co., the last shoe manufacturer to occupy the Benedict Shoe factory.  On August 14 1904, Lockwood became the sixth person in New Canaan to own a car. He purchased a Northern from Dewitt Merritt, a local jeweler and agent for the Northern company.

After both George and Emma passed away, the property was bought by St. Aloysius in 1938. The house was used as a residence for the Notre Dame de Namur Sisters who taught in the school. The house was torn down in 1966 or 1967 when the construction of the new St. Aloysius began.