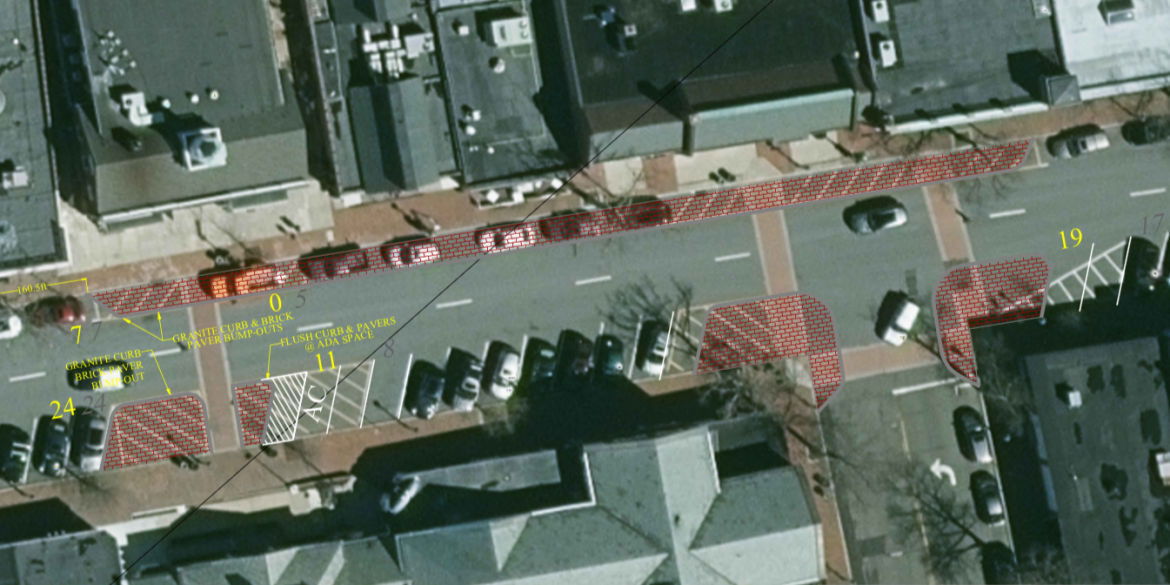 Draft aerial schematic of the sidewalk bump-out proposal for Elm Street. Sidewalks would be bumped out in the red-hashed areas. Five parallel parking spaces would be lost on the north side of Elm Street between South Avenue and the Playhouse crosswalk, while five total spaces would be gained on the south side of Elm—three below the same crosswalk (in front of the Bank of America building) and two more just east of the intersection of South Avenue and Elm Street. Image courtesy of the New Canaan DPW

Public works officials next week will will bring forward a proposal to widen several sections of sidewalks on Elm Street, chiefly on the north side of the road between South Avenue and The Playhouse. 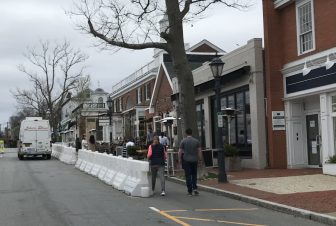 Under a plan that the Department of Public Works will propose to the Police Commission, sidewalks on the north side of Elm Street areas will be widened in the way that they’re currently barricaded off. Credit: Michael Dinan

Mentioned during last month’s Police Commission meeting, the new configuration will make permanent some of the pandemic-related changes now in place with temporary barricades, as well as bolster pedestrian safety in a major shopping and dining area of downtown New Canaan, according to Public Works Director Tiger Mann.

“We are looking at bumping out the sidewalks from the intersection with South Avenue up to and through The Playhouse on the northern side and then on the southern side, the crosswalk at The Playhouse itself and then the intersection of South Avenue and Elm Street,” Mann told members of the Selectmen’s Advisory Committee on Buildings and Infrastructure during their regular meeting Monday. 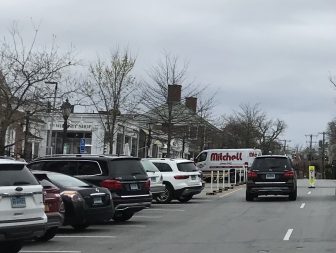 Public Works officials say Elm Street will gain back five spaces on the southern side of Elm Street, including three below the mid-block crosswalk (cordoned off with posts and chains in the photo). Credit: Michael Dinan

“What that will do is that should help us on reducing the pedestrian crossing length of the crosswalks and then protecting the areas adjacent to the crosswalk, whereby right now it’s 25 feet on either side, if you have a hard bump-out you can actually reduce that requirement in certain locations,” he said during the meeting, held via videoconference. “And what it turns out to be is, we would lose five spaces on the northern side and gain five spaces on the southern side so it would be a ‘net zero’ change.”

Mann said he’s bringing the proposal to the Police Commission for approval at the appointed body’s April 21 meeting.

His comments to the Committee came during a general update on Public Works-related projects in New Canaan.

Committee member Penny Rashin asked whether the bump-outs would serve pedestrians only or if they’d create more space for outdoor dining.

Mann said, “It would allow for additional space for outdoor dining, similar to what we have right now but the main focus would be pedestrian safety. What we have are, in those areas that are hashed we are having a lot of people park in those areas which is then closing off the accessible aisle for individuals with disabilities, and then it’s avoiding the safety issue, right? So they are parking in areas where we’re saying it’s unsafe to park. So we striped it. The best way to do that is to hardscape it and then prevent that access, and then the secondary benefit is that yes, we could then utilize those areas for additional outdoor dining or for additional retail space.”

Committee member Stuart Sawabini asked for clarification on how the town would gain back five spaces on the south side of Elm, under the plan.

According to a draft aerial schematic of the plan, three spaces would be gained just below (east of) the crosswalk in front of the Bank of America building, and two more would be gained just below the southeastern corner of South Avenue and Elm Street. New Canaan three summers ago lost more than one dozen parking spaces on Elm Street due to enforcement of a state law that requires a 25-foot buffer zone on either side of pedestrian crosswalks. Yet by bumping out the sidewalk alongside those crosswalks, and so protecting the residents that use them from the possibility of a vehicle striking them, the length of that buffer can effectively be reduced, officials said.

“Basically what happens is right now we’ve got it striped 25 feet on either side of the crosswalk,” Mann said. “On the tailing edge of the crosswalk itself where cars are backing out, you can’t necessary gain space back, right? Because as the car comes back out into the lane, it needs about 24 feet to get out into the lane, so that bump-out area you can’t. But on the front, on the leading edge of it, you can. You can take away that entire 25 feet, right? Because now it’s hardscaped and protected because a car can’t, in essence, jump the curb. So we gain spaces on the leading edge. We don’t necessarily gain spaces on the following edge or the tail edge.”

First Selectman Kevin Moynihan, also a member of the Committee, said that Greenwich is expanding its own bump-outs downtown “to accommodate their outdoor dining in Greenwich.”

“And this bump-out will help several restaurants and we may want to look at doing some further bump-outs just for the restaurants in the future,” Moynihan said.

8 thoughts on “Public Works: Plan To Widen Sidewalks on Elm Street Will Result in a ‘Net Zero’ Change to Parking”