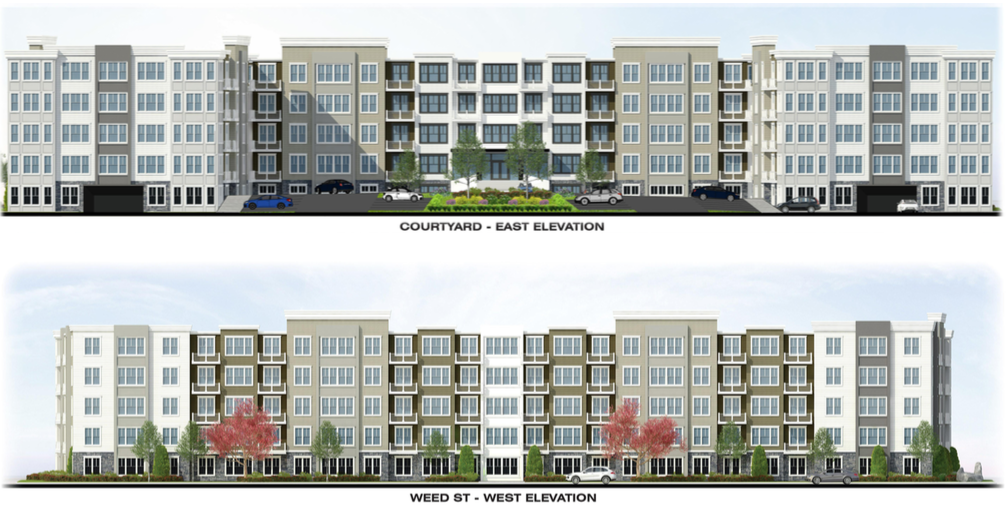 Members of the Planning & Zoning Commission last week signaled that they’re preparing to deny a widely discussed application now before the appointed body to build a 102-unit development—including 31 apartments rented at affordable rates—on a 3.1-acre parcel at Weed and Elm Streets.

Though it has not yet taken a formal final vote for the application at 751 Weed St., members of the appointed body during a special meeting held Oct. 13 agreed that plans filed on behalf of the limited liability company that owns the property call for overly dense development that leads to health and safety problems.

“Basically this whole site is built out,” P&Z Secretary Krista Neilson said during the meeting, held at Town Hall.

“It far exceeds coverage of anything else we’ve ever seen or allowed to be built in the town, and there’s a reason for that,” she continued. “I mean, there’s a very good planning reason why you don’t just build 100% site coverage on a site. Because you have to have some pervious surface for stormwater drainage. You have to have some open space or recreational space for your residents to play. You have to protect adjacent neighbors from noise, air and light pollution with adequate buffering. And when you put too many units that need too much parking on too small of a site, you can’t fit all of those things, and that’s what I see happening here. And so as a result, this project is going to kind of ‘off-put’ its externalities on the surrounding environment. It’s not able to manage it all on their site because they’ve taken it up with the units.”

P&Z Chair John Goodwin at the start of the meeting called for commissioners to get a sense of where the group is going in its decision. Saying the applicant is not willing to reduce the size of the building and that nothing can be done to alleviate anticipated traffic problems, commissioners said a conditioned approval would not make sense.

The expected denial will set up an appeal process under Connecticut statute.

Under the state law known by its statute number, 8-30g, in towns where less than 10% of all housing stock qualifies as affordable, developers can appeal to the state to skirt local planning decisions in projects that set aside a certain percentage of units at below-market rates. As of 2020, just 2.94% of New Canaan’s housing stock qualifies as affordable, according to data from the state.

“Those appeals are treated differently by the court than most appeals to an action that you take,” he said. “Typically when the Commission makes a decision, an appellant has the burden of proving that the decision was unreasonable or wrong on whatever grounds they choose to make that argument. With respect to 8-30g, the burden is on the Commission and basically it’s got three things primarily that it has to do. The first thing is based on substantial evidence on the record. Everything you are doing here is based on substantial evidence on the record. And that it’s supported by sufficient substantial evidence. You have to prove that, based on that evidence, the decision you made is necessary to protect—and I’m reading from the statute—’substantial public interest in health, safety or other public matters which the Commission may legally consider.’ That is the first thing you have to determine. Then the second thing is the public interest which you’ve identified clearly outweighs the need for affordable housing. And finally you need to determine that such public interest cannot be protected by reasonable changes to the plan that was submitted.”

He added, “It’s a tough burden, no question about that. But that’s where a court will look at this.”

Gelderman said that he and Town Attorney Ira Bloom “have done a few of these over the years and our experience is just that it is a tough burden.”

“We’ve prevailed in a couple and not prevailed in probably more than a couple based on the court’s interpretation of the statute and the burden that the Commission has,” he said. (The town has not issued an RFP for legal services in more than 10 years, during former First Selectman Rob Mallozzi’s first term.)

Commissioners asked Gelderman what it would mean to consider “other matters” under the law, in addition to health and safety (matters related to health and safety, such as fire and traffic safety, specifically, or environmental concerns), what constitutes “substantial evidence” based on case law (P&Z must decide which experts it trusts), how denials fare in the appeals process versus applications approved with conditions (outright denials garner more appeals), whether the Commission can consider density and height, specifically, in making its decision (8-30g supercedes local regulations unless a direct public health or safety concern can be demonstrated), whether P&Z can base its decision, in part, on the design of the building from an aesthetic perspective (no), whether it would make a difference if New Canaan had an Architectural Review Board like Greenwich (no, that’s an advisory body), how the town gauges “the need for affordable housing” (the more such housing a town has, the less that need is), whether the Commission in making its decision could note the amount of affordable housing units in neighboring municipalities such as Norwalk and Stamford (yes), whether a P&Z member herself or himself could be considered an “expert” (not as such), whether “experts” are limited to those who identify themselves during public hearings (no, as long as it’s in the record) and whether “health” is limited to physical health only or could include mental health (past cases focus on phyiscal health).

The plans for Weed and Elm were filed with the town in February and—after the Board of Finance (in its role as Water Pollution Control Authority) denied a related sewer application—P&Z in June began holding hearings on applications for a site plan, proposed text change to the New Canaan Zoning Regulations and attendant map change.

Over seven P&Z meetings, town officials and residents opposed to the plan, as well as their lawyers and consultants, voiced concerns about the proposed density of the redevelopment, traffic congestion, pedestrian and motor vehicle safety, emergency vehicle access, construction materials, stormwater quality and runoff, provisions for light and air, the environment and property values. They also said the proposal is not consistent with some of the principles laid out in a periodically updated, state-mandated document that guides development in New Canaan.

At last week’s meeting Commissioners said that predictions coming from traffic consultants on the applicant’s side were nonsensical and lacked analysis of delivery vehicles, that the habits of pedestrians in the area seeking to get to their destinations faster will lead to further hazards, that the scope of the project puts New Canaan out of fire safety guidelines with respect to staffing, that New Canaan already reaches capacity at the Wastewater Treatment Plant during increasingly frequent heavy rainstorms, that emergency response officials have flagged access problems, that the applicant’s plan is lacking in open space and seeks only to max out the financial return of the property and that the proposed building will destroy the character of the town.

Ward said the number of cars at the development, all of which would exit one-way onto Weed Street since the site would have a one-way entrance from Elm, exacerbates what already is a busy intersection of both vehicles and cars.

“You have a lot of potential vehicles that will be leaving the property to go, presumably, many of them, into town, for groceries, for drug stores, for the Post Office, for clothing and shopping,” Ward said. “It’s all in town. You come out on Weed Street, you take a left. You cross the northbound traffic on Weed Street. I think the record will show that Weed Street is a pretty busy street. And the traffic tends to move fairly quickly. I’ve lived in New Canaan now for more than 25 years. I’m on the west side of town, so if I need anything in town, which is frequent, I have to come into town. I come on Wahackme, south on Weed, turn left onto Elm. It’s that intersection, Weed and Elm, which is a main intersection, a principal intersection in the town of New Canaan and there certainly is traffic there. There now is a crosswalk that was built across Weed with the right–of-way for the pedestrian. A blinking light comes on so the traffic has to stop and let the pedestrian cross. I think we’ve heard testimony from neighbors and others who tend to use Weed that that pedestrian walk has caused more congestion than had previously existed on Weed Street itself. I think we’ve heard some testimony that those who try to cross on that pedestrian crosswalk have to be very careful. They can’t just assume that the blinking light means everybody stops and they don’t have to look and just walk across. They won’t last long if they do that.  Because the traffic tends to either not really see or not be used to the fact that there is a crosswalk and it tends to go, suddenly they have to put on the brake as they see someone walk. That’s what exists. It’s a busy intersection.”

Goodwin called for Gelderman to work on a draft denial of the Weed and Elm applications for the Commission to review. P&Z’s next regular meeting is scheduled for 6 p.m. on Oct. 25, according to a meeting calendar posted on the town government website. Town Planner Lynn Brooks Avni said during the meeting that P&Z has until Dec. 1 to make its decision.

Since the application at Weed and Elm was filed, two additional 8-30g affordable housing applications have come in to P&Z from Karp—for 20 units at the former Red Cross building on Main Street, and for 93 units on Hill Street below Brushy Ridge.

The town in the recent past had been able to secure four years of relief from 8-30g by securing a Certificate of Affordable Housing “moratorium” from the state Department of Housing.

The town had qualified for one such moratorium in 2017, with the denser redevelopment of New Canaan Housing Authority-owned apartments Millport Avenue, and hoped to qualify for another through the redevelopment of the Canaan Parish complex at Lakeview Avenue and Route 123, which was partially completed one year ago. Yet financing difficulties with the project emerged in April 2019, nearly a full year prior to the onset of COVID-19 here, and then the pandemic itself caused further delays, officials have said. After initially balking, First Selectman Kevin Moynihan said in late July that the town had filed its application for a moratorium, kickstarting a 90-day statutory review period. Moynihan said this month that the town had been “led to believe” by state officials that its application for the moratorium would be approved. Some in town have questioned why, given that New Canaan hasn’t added affordable housing since October 2021, the town was not prepared to file for its moratorium at that time, potentially heading off the three 8-30g applications that have come in.

[Comments submitted by trolls of the New Canaanite will not be approved—we don’t want you as readers and ask that you stop getting the local news here. Thank you.]