An injured heron is recovering at an area animal hospital thanks to residents and police who rescued the bird in southeastern New Canaan earlier this month. 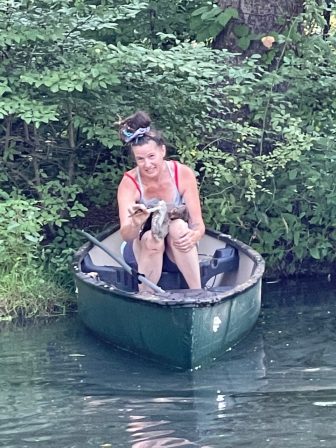 The caretaker with the rescued heron on a Stoneleigh Road property. Photo courtesy of the Animal Control Section of the New Canaan Police Department

A woman who cares for a property there that includes a pond told Halm that one of the heron’s toes appeared to have been severed and that the bird had been hanging around for a few days, she said.

With instructions and a net from Animal Control, the caretaker paddled a canoe out to an island in the pond and managed to capture the heron—the birds are considered dangerous and their beaks need to be held shut when handled, Halm said.

The heron was emaciated at the time of its capture, she said. It’s unclear how the injury was sustained, Halm said.

The bird was transported to the South Wilton Veterinary Group, where such injured wildlife can be assessed, with an eye on having the heron rehabilitated at a facility such as Weston-based Wildlife In Crisis.

The heron is to be returned to the pond where it was captured as soon as it’s healed and able to hunt for food, Halm said.

2 thoughts on “‘She Did a Great Job’: Local Caretaker Rescues Injured Heron”