Police at 9 a.m. Monday received a report of vandalism at the Vue New Canaan. Damage was done to carpet and walls at the apartment and condo complex, police said. An active investigation is underway.

The New Canaan Garden Club has withdrawn its proposal to replace Japanese maple trees on one side of a walkway near Waveny House with peonies and flowering plants.

New Canaan Police responded to reports of sick and injured squirrels on July 9 (Grove Street) and July 12 (Brooks Road). In at least one case, Animal Control captured and transported a squirrel to nearby Wildlife In Crisis for rehabilitation.

First Selectman Kevin Moynihan said during Monday’s meeting of the Selectmen’s Advisory Committee on Buildings and Infrastructure, held via videoconference, that “we need to think about going back to in-person meetings, perhaps in September.”

The Board of Education’s two scheduled meetings for July have been canceled. 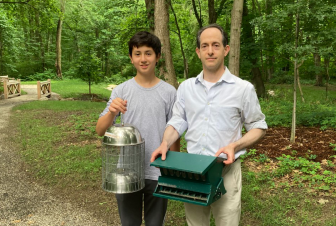 Two friends of Bristow Park, Avery and Newell Cotton, spent last Saturday afternoon removing and cleaning 10 bird feeders in the sanctuary. With unexplained songbird deaths in neighboring states, volunteers are taking the precautionary step of disinfecting the Bristow feeders with a 7% bleach solution. Chris Schipper, chair of the Conservation Commission, thanked the Cottons and said in a statement that “residents should also clean their feeders, which now can be left dormant over the summer period as adequate nutrition is available.”

The United Methodist Church of New Canaan’s Sunday services are held at 10 a.m.

The New Canaan Building Department on July 7 issued a permit to construct a 7,000-square-foot home at 322 Dan’s Highway. The prior home there had been damaged in a November 2019 fire. The new one will cost about $1,275,000 to build, the permit said.

Big shopping weekend coming up. The New Canaan Chamber of Commerce’s Sidewalk Sale, sponsored by William Raveis, will be held Saturday with a preview out front of local merchants’ shops on Friday night. Also, MB Sport at 31 Grove St. is having its indoor “Beat the Heat” sample sale of sportswear and activewear 12 to 6 p.m. through Friday ($10 per item, three for $25) and 8 a.m. to 12 p.m. Saturday ($5 for what’s left).

A reminder for registered New Canaan Republicans that the party’s all-important Caucus is to be held at 6 p.m. next Tuesday, July 20 at New Canaan High School. Information on candidates here. NewCanaanite.com published a series of Q&As with those candidates and they can be found here.

Police at 7:25 p.m. on July 7 received a report of Amazon packages being tampered with at a residence on Avalon Drive East.

The Exchange Club of New Canaan Foundation announced this week that it’s given $200,000 to 28 nonprofit organizations in New Canaan and neighboring communities over the past year.

A section of fence at Park View Condominiums at 179 Park St. was reported to police as damaged at 5:36 p.m. on July 7.

Finally, the Newcomers Club of New Canaan announced that it is receiving applications for funding through Aug. 27 from 501(c)(3) organizations.