State officials deny that New Canaan had been “led to believe” its application for four years of relief from a widely discussed affordable housing law would be approved, as First Selectman Kevin Moynihan recently asserted.

Moynihan had said during the Oct. 4 Board of Selectmen meeting that “we expect to get our moratorium on November 1st.”

He added, “We’ve been told by—led to believe, I would say—by the Housing Department that we are going to get our moratorium. If that does not occur then that will be ‘all bets off’ in terms of where we are.”

The Connecticut Department of Housing denied the application about two weeks later. Yet while the matter had been pending, the land use attorney representing a local developer in applying for an affordable housing project at Weed and Elm Streets, Tim Hollister, asked the DOH to explain Moynihan’s comments.

“I recognize that the Department has no obligation to respond to such a request, but given the alleged circumstance – the First Selectman of a municipality with a pending moratorium application asserting that ‘the Department’ in a private conversation led him and Town to believe that the application will be approved, over the objections filed – is simply contrary to how this public process should proceed,” Hollister said in an Oct. 18 email obtained by NewCanaanite.com. “If the First Selectman is misstating what he was told, then the Department should explain that. If the First Selectmen is accurate, why did the Department undertake to provide this explanation to him? At issue here is public confidence in the moratorium process.”

In response, Michael C. Santoro, director of the DOH’s office of policy, research and housing support, said in an Oct. 25 email, “As you know, the Department always strives for transparency and we appreciate your reaching out with your questions about what you read in the newspaper.” 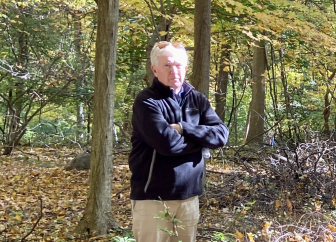 First Selectman Kevin Moynihan during an Oct. 21, 2022 site visit to an area behind West School, where a cell tower has been proposed. Photo published with permission from its owner

“We cannot speak as to the basis of the First Selectman’s belief,” Santoro said in the email, obtained by NewCanaanite.com. “I can assure you, however, that the Department did not and would not offer any opinion as to the eligibility of a municipality for a moratorium outside the official application process. Given the detailed and complex nature of the review it would in fact be impossible to pre-count HUE’s [housing unit equivalent points], or pre-judge the outcome of a request for a moratorium, and I did not suggest to the First Selectman or any other representative of the town that any determination of a forthcoming or pending application had been made.”

Though town representatives had contacted Santoro prior to filing the moratorium application “inquiring about the Department’s position on certain issues relating to their application” and “in particular, whether they needed to deduct points for certain affordable housing units that had been demolished,” the state’s response was only to share the requirements of the statute and regulations, Santoro said.

“As I have explained, I indicated that the town was welcome to submit an application with a differing interpretation of the Regulations that would be subject to public comment and review and determination by the Department as part of the application process,” Santoro said in the email. “I did not indicate what the outcome of such [a] process would be.”

New Canaan now is in a position where it’s unclear just when the town will be able to secure four more years of relief from the affordable housing law known by its statute number, 8-30g. Since the town’s last moratorium lapsed in July 2021, three applications for affordable housing projects have come in, all from local developer Arnold Karp. The Planning & Zoning Commission is expected to deny a 102-unit proposal for Weed and Elm Streets, which will trigger an appeal process at the state level. Applications for 20 units at the former Red Cross building on Main Street and 93 units on Hill Street also are before P&Z.

Public officials have called Moynihan out for making misrepresentations in the past.

In June, members of the Ethics Board cited factual inaccuracies in a public statement that Moynihan had made regarding an ethics investigation that resulted in an advisory opinion critical of the first selectman’s conduct leading up to the municipal election last year. One year ago, Selectman Nick Williams flagged comments that Moynihan had made with respect to supposed support from the superintendent of schools and head of the New Canaan Athletic Foundation regarding construction of a new police station where a Saxe Middle School baseball diamond sits. In January 2021, the town clerk described comments Moynihan had made regarding municipal record-keeping as “misinformation” and “misleading.” In the early months of the pandemic, then-Emergency Management Director Mike Handler said Moynihan outright lied about the circumstances of his dismissal from the role.

6 thoughts on “State Housing Department: No One Told Moynihan Moratorium Application Would Be Approved”