Contrary to what First Selectman Kevin Moynihan suggested at a public meeting last week, the superintendent of schools and head of the New Canaan Athletic Foundation are not in favor building a new police station where a Saxe Middle School baseball diamond now sits, according to Selectman Nick Williams.

During a regular Board of Selectmen meeting Tuesday that grew heated at times and included what appeared to be unwanted physical contact, Williams said that Moynihan had “intimated” at a joint public meeting “that both [Superintendent of Schools Dr.] Bryan Luizzi and [NCAF Chair] Mike Benevento are in favor of this proposal.”

“I have spoken to both of them individually and they are not in favor this proposal,” Williams said during the selectmen meeting, held in Town Hall and via videoconference.

To Moynihan’s assertion that Luizzi and Benevento responded positively to the idea of turfing some Saxe fields as a way to make up for athletic grounds that would be lost to the proposed new station and parking lot that would surround it, Williams said, “They are not in favor of the general proposal. Bryan specifically said look, I haven’t even considered that. That is Board of Ed decision. And that is another negating factor with respect to this project. These guys need a new police department. And we can’t be mucking around talking about what I referred to as a ‘dumb idea.’ It’s actually worse than that. It is a galatically stupid idea to do this, with all deference to Lt. Kaffee.” 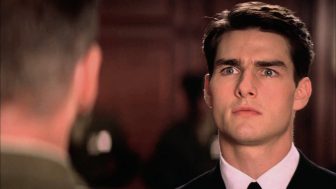 He referred to a U.S. Navy lawyer Lt. Daniel Kaffee, played by Tom Cruise in 1992’s “A Few Good Men.” In the movie, Kaffee tells a fellow lawyer, Lt. Commander JoAnne Galloway, played by Demi Moore: “Thank you for playing ‘Should we or should we not follow the advice of the galactically stupid?’ ” (Williams and Moynihan are both lawyers, too.)

Earlier in the discussion, Williams made another pop culture reference, saying of the project, “Pave paradise and put up a parking lot” (Joni Mitchell).

The comments came during a discussion of general matters before the town. After months of keeping it under wraps, a team assembled by Moynihan during a Sept. 29 joint meeting of the selectmen, Board of Finance and Town Council unveiled a proposed $23.5 million two-story, approximately 24,000- to 25,000-square-foot glass-and-brick exterior police station would sit on 3.6 acres running east off of South Avenue just past the New Canaan Y. It would include an underground level with a shooting range, and 89 parking spots spaced across about 36,000-square-feet around the building.

Moynihan and his team said the advantages of the project—as opposed to renovating-in-place at 174 South Ave.—included having a new purpose-built station that would last at least 50 years, and that the cost of construction could be offset by selling the current building and converting it into senior housing. That housing then could bolster New Canaan’s tax base, Moynihan has said. Others at the meeting, including Williams, voiced concerns about aesthetics, traffic and uncertain financials, as well as the idea of siting a police station right next to two schools. They also called for access to more detailed information regarding other possible locations that Moynihan’s team had rejected while meeting out of the public eye.

Williams asked why the appointed Police Building Committee had been “walled off from considering new sites” and only assigned to study renovation or rebuilding possibilities at the current police station site. (Moynihan did not answer the question.)

“And much to their chagrin,” Williams said of the Committee members. “They didn’t realize that there was this whole other series of meetings taking place within the building here.”

Moyinhan: No meetings were held.

Moyinhan: I meet with Tiger and Joe daily on lots of things.

Williams: On this specific issue.

Moyinhan: Well again, there’s no committee internally. We asked all the nine representatives from wetlands and land use and everybody—

Williams: —but you still haven’t answered my question. Why did the building committee—it’s called the ‘Police Building Committee’—only consider the current site?

Moyinhan: Because that was plenty of work right there. And they didn’t have the expertise that our nine employees have, including the police, to work on the other matter.

Williams: But they had expertise to look at the existing building? Your logic escapes me.

At least twice during the discussion, Moynihan could be seen placing a hand on Williams from his seat next to him. Williams could be seen pulling back, at one point saying, “Stop pushing me.” Two of the incidents come at 47:45 and 48:03 in this video (bookmarked just before it, article continues below):

Moynihan first aired the idea of building a new police station on the ballfield during a press briefing in January 2019 (audio here). He said the idea originated with Stuart Sawabini, former chair of the Police Commission. Sawabini serves as an “advisor” to the volunteer Committee and also has taken part in the non-public discussions of Moynihan’s team.

When Williams said to Moynihan in reference to the Saxe plan, “You are pushing this,” Moynihan responded, “I have not said one word about being supportive of this project.”

Williams said that Moynihan has sent around a letter that defends the Saxe project in the face of other options.

Williams told Moynihan, “You were talking about this two years ago. This specific site.”

Moynihan: Stuart Sawabini was talking about this two years ago.

Williams: Stuart reports to you, or reported to you.

Moynihan: No he didn’t. That’s clearly not true. And also, I respect Stuart’s judgment. I respect our police judgment.

Williams: I respect our Police Department. Which is why I want to get them a new building as soon as possible. And having a new location at Saxe is going to hold this thing up for years. And if you don’t believe that, I don’t know what to say.

Selectman Kathleen Corbet said during the meeting that the Board “should have representation there on this Committee also from at least one of us on the Board of Selectmen.”

Moynihan responded, “I am representing the Board of Selectmen.”

She continued, “Maybe another one [selectman] can also participate, so that would be great. I don’t think we want to leapfrog sort of the input from the Board of Selectmen, is all I’m saying.”

Moynihan said he wasn’t sure what role the selectmen would play “beyond signing contracts when we finally get a recommendation from funding bodies.”

“I don’t think we are going to have a vote on this process, to be honest with you,” he said.

“I think it’s pretty clear from these options, the options that we did see, the number-one architecturally viable option, from my vantage point, that came out from Saxe, might be architecturally viable but misses on a couple of points, and that is including the loss of open space, the fact that those fields are in many ways sort of Norman Rockwell-esque in terms of those ball fields and what we see when we come into town,” she said.

Town officials have discussed the need to at least renovate the 1927-built Police Department on South Avenue—originally built as the first New Canaan High School—for many years. Renovating the existing police building would cost from $14.7 to $18 million, architects have said.

The Board of Finance is expected to take up the police station recommendations at its Oct. 12 meeting. Moynihan said the town is “probably not going to have a decision” on a renovation or rebuilding project before Thanksgiving “because the Town Council is in transition, and we have two or three other locations to tee up for consideration.”

Moynihan intimated that more information was forthcoming that could rule out a renovate-on-site project.

“Quite honestly there are reasons not to renovate that building, and those will be discussed over the course of the next few weeks,” he said.

When Corbet expressed a desire for more selectmen representation on the Committee, Moynihan said that “you can have your opinion” as a “layman” (Corbet responded, “thank you”), but that it’s important to “listen to the architects.”

“Listen to the architects who actually do this all around the northeast,” Moynihan continued. “And I think sometimes when they come in, they see New Canaan with different eyes than we see it.”

Williams responded, “Sure, have them come in and run for the Board of Selectmen, if you want to just defer that.”

The question of the Board of Ed’s or school district’s position on the proposal at Saxe did not come up during the elected body’s regular meeting Monday.

Moynihan has been accused of making misrepresentations in the past, including by former Emergency Management Director Mike Handler and Town Clerk Claudia Weber. In January, he said this news outlet had reported “untruths” while also denying a report that a Parking Commission member had been blindsided by the town’s decision to not reappoint her.

When he first shared the idea of siting a new police station at the Saxe field nearly three years ago, Moynihan said this news outlet had “misreported” that he was pressing for the project, adding, “We are a long way from reaching a recommendation about renovation versus relocation because there are several variables still in motion, but I assure you that there will be ample opportunity for community input before a final recommendation is reached.”

In announcing their re-election bids earlier this year, both Moynihan and Williams referred to having “unfinished business” in New Canaan. They’re running uncontested in the Nov. 2 municipal election, as is Corbet.

Moynihan early on in Tuesday’s discussion reviewed work done over the past several months by two separate architectural firms that culminated in the presentations on renovating and rebuilding at last week’s meeting. He said that afterwards he “received almost 16, 20 emails, probably inspired by Mr. Williams here.”