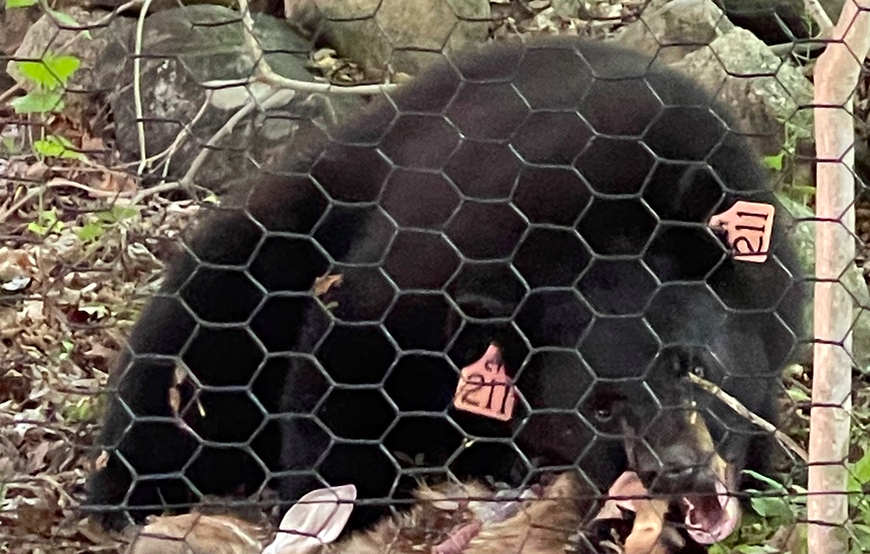 The black bear marked with state orange state tags No. 211 has been seen in northern New Canaan on on June 17 and 18, 2021. Photo courtesy of the New Canaan Police Department Animal Control section

The head of the New Canaan Police Department’s Animal Control section is urging residents to be vigilant of a black bear that’s been seen killing and eating newborn fawns in the northern part of town this week.

Though the bear marked with orange tags no. 211 hasn’t caused real trouble for people yet, “we really need to discourage people from stopping and photographing him,” according to Animal Control Officer Allyson Halm.

Residents if they encounter the bear instead of capturing images of the animal should “haze him, throw things at him, anything, otherwise he will get himself in trouble,” Halm said.

On Thursday morning, police spent about two hours watching the bear after the animal had trapped a young fawn near a bus stop on Logan Road, Halm said. Though three douses of bear spray moved the bear enough for authorities to try and rescue the fawn, the animal did not leave the area, she said. Eventually the bear moved east toward Michigan Road, into a fenced-in yard, and officials thought he had climbed out and left the area, Halm said.

Then on Friday morning, a resident on Lost District Drive phoned police to say they had spotted the bear on their property and that when the individual moved to take a video of the animal, it charged them, according to Halm.

Later in the morning, a landscaper on nearby Alan Lane said the bear could be seen eating another fawn, she said. Residents of the area have chickens and beehives.

“That tells me he will not leave the area soon, because he now has a food source and a full belly,” Halm said. “So we are a little concerned.”

She said she’s reported the bear’s presence in New Canaan to the Wildlife Division of the state Department of Energy and Environmental Protection.

Halm has said New Canaan is seeing an increasing number of black bears appear each spring. The first reported bear sighting of 2021 came in on Tuesday, on Briscoe Road.