New Canaan Music is poised to move this summer from its original location in “the alley” on Elm Street to a larger, more conspicuous space on Main Street, officials say—a great sign for the locally owned business as well as for a block that’s seen merchants vacate street-level storefronts in the past year. 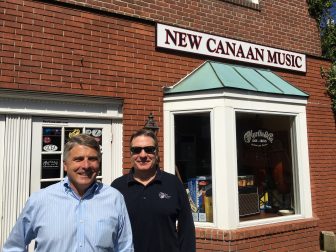 Owner Phil Williams said that after four years in the alley near Chef Luis, “we are ready to take it up to the next level” in moving to 90 Main St., most recently the temporary site of the New Canaan Post Office, near the corner of East Avenue.

“We will have bigger and better lesson rooms, a bigger and better store and a more prominent location,” said Williams, a town resident with a son in public schools here and who serves on the Board of Directors of the New Canaan Chamber of Commerce.

“This really puts us more on the map. This [the original location] has been a good place that has really served us well for the past four years—I can’t believe it has already been that many years—but it has given us a good launching point to take it to the next level.” 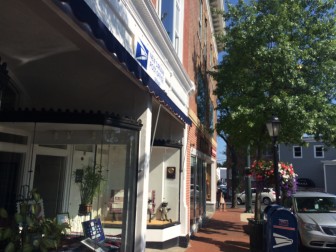 The Post Office had occupied the space at 90 Main St. until its new building went up on Locust. New Canaan Music will move in following a buildout, in August. Credit: Michael Dinan

New Canaan Music’s space will increase by more than half as much in the new space, from approximately 1,200 to 2,000 square feet, Williams said. The retail shop itself will be bigger with expanded offerings, and the music rooms will be larger and better soundproofed, he said. He’s planning an August move, following an interior build-out.

The shop and Williams himself—including with his band, The Scavengers—have been deeply involved in the community since launching. The store regularly supports performing arts productions at Saxe and the high school and has participated in community initiatives including Art in the Windows, the Pop Up Park and the Waveny Park Conservancy’s inaugural “tailgate party” fundraiser last fall.

“It’s great that his business is growing,” Murphy said. “We see a lot of activity in and out of there and we think that the new location will be great for him.”

She added that once businesses start moving into the vacant spaces on the block of Main Street between East and Locust Avenues, “it will provide excitement.”

The area has been the subject of discussions among the town planner, chamber and members of the Planning & Zoning Commission since it saw a series of vacancies in the past year or so, including JoS. A. Bank, Subway and Island Outfitters, among others. Officials have discussed changing the Zoning Regulations for the “Retail A” zone to allow for some service-type businesses in addition to retail.

For Williams, the larger space will allow him to meet rising demand for lessons.

“We are ready to go,” he said. “We are moving to Main Street, which is really what a lot of businesses strive to do. We need a bigger and more prominent space.”

5 thoughts on “‘Take It to the Next Level’: New Canaan Music Moving to Main Street”