A five-year veteran of the New Canaan Police Department will serve as the next officer assigned to patrol the downtown and build relationships with the businesses there. 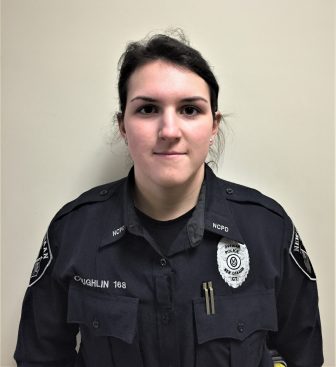 Officer Kelly Coughlin started in the role of Community Impact Officer or ‘CIO’ Jan. 1, according to Police Chief Leon Krolikowski.

Established in 2014 following the armed robbery of a jewelry store on Elm Street—and filled in the past by Officers Roy Adams and Ron Bentley—the position has been cut for stretches of time in the past due to budget restrictions and staffing needs.

In October, the People’s Bank on Main Street was robbed at gunpoint, and between two brazen daytime thefts in November, more than $7,000 in merchandise was stolen from Ralph Lauren on Elm Street.

Krolikowski in a press released described community policing as “one of our department’s primary focus areas.”

“One of the goals of the CIO is to establish strong relationships with merchants and the downtown community,” he said. “Engaging with the public in the center of town, deterring criminal activity, and enforcing traffic laws are priorities of the CIO. Officer Coughlin will be a direct contact for downtown businesses and the Chamber of Commerce. She will provide advice and guidance to all businesses, which we hope will deter crime.”

Coughlin joined the police department in December 2015. She holds a bachelor’s of science degree from the College of New Jersey, where she majored in Criminology and a minored in Spanish. She received the Medical Service Award in 2017 NCPD Meritorious Duty Award in 2018, in connection with apprehending a suspect and solving several burglaries, and in 2019 served as a point-person for the department in collecting video surveillance footage from the public in the weeks that followed Jennifer Dulos’s disappearance. In 2016, she adopted a kitten that had been abandoned on Locust Avenue.

Laura Budd, executive director of the New Canaan Chamber of Commerce, said in a statement, “The Chamber is thrilled to have the CIO program re-instated. While NCPD is always visible in town, having a dedicated officer who has working relationships with all the businesses provides a great sense of comfort for the stores, restaurants and offices. We look forward to working with Officer Coughlin and know she will be a huge asset to the community.”