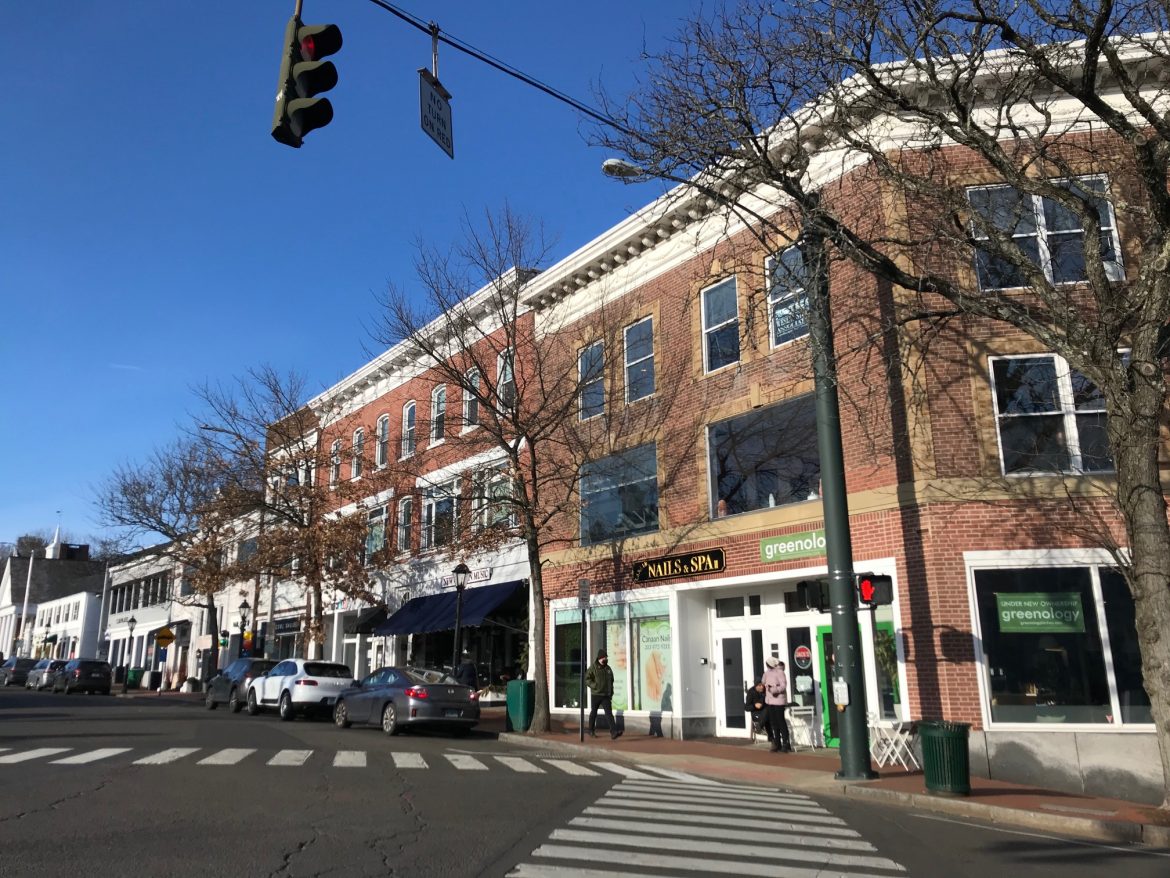 Municipal officials say they’re collecting data to help determine whether to change the parking rules or configuration in a long-discussed area of downtown New Canaan that’s seen a rise in recent years in service-oriented businesses.

Members of the Police Commission are asking an officer assigned to the downtown beat to observe the area of Main Street just north of East Avenue in the mornings. Officer Kelly Coughlin will gather information for police and parking officials so they can better understand how heavily a 7 to 11 a.m. loading zone there is used by delivery trucks, and whether those seeking to patronize businesses in the immediate vicinity have ample on-street parking spaces further up Main Street or across it, in front of Town Hall.

The main focus is a two-hour window from 9 to 11 a.m., when parking enforcement officers are patrolling downtown New Canaan and several businesses that front the loading zone—including greenology and StretchLab—are open and busy serving customers and clients.

“It’s busier than people think,” Coughlin told the Commission at its Jan. 20 meeting, held via videoconference.

“There is a lot of coming and going, depending on which business. It may be somebody parking for just five minutes to get coffee, but StrechLab, like somebody mentioned, if they have an appointment some of those spaces are taken up for a longer period of time. So I think that’s something I can definitely pay more attention to in the mornings, and get a better feel for how many spots are used. Because I definitely do see the concern where they [business owners] are coming from and just trying got make it work and see if there’s enough space in area to accommodate both loading zone and the businesses. If there is something within just those two hours that might help everyone, I think that’s something logistically—if I am standing at that intersection in person, I can make a note of and come up with some better suggestions.”

Coughlin’s comments came during a discussion of the loading zone prompted by James Marks, who opened the food service establishment greenology in the former Organika space on the corner of Main and East Avenue in November.

Marks said it limits his business when customers get ticketed for parking in what he described as an under-utilized loading zone that takes up four parking spaces directly in front of the store, and that he would prefer to have 15-minute parking there. Marks said he himself pays $30 tickets incurred by drivers for delivery services such as GrubHub and Uber Eats who pull into the loading zone in the morning and enter greenology to pick up orders.

Parking and police officials said the loading zone has been in place for many years, chosen in part because it’s wide enough to accommodate delivery trucks that need a designated area to pull over, that enforcement officers ask motorists to move if they’re in their vehicles and that it’s bad practice to re-designate loading zones based on what businesses happen to occupy the storefronts near them at a given time.

Public safety and parking officials for years have grappled with the question of where to locate loading zones in downtown New Canaan.

Until recently, the two loading zones downtown were located on South Avenue just off of Elm Street and on the east side of Main just north of East Avenue (in front of greenology).

In May 2014, citing traffic and safety concerns caused by double-parking delivery trucks—a problem caused, in part, by the loss of a long-term loading zone in front of the temporary Post Office on Main—the Police Commission added two more, on the one-way stretch of Forest Street and on Elm Street near Park. Problems of motorists ignoring the designations persisted. In December 2015, in part to give sightline-blocking trucks that had been parking in front of a salon on East Avenue a better option, the town designated a new loading zone in front of the former Thali restaurant building on Main. Plans at the time called for that new loading zone to revert to regular parking as soon as the Post Office vacated its temporary location across the street. But motorists regularly violated loading zone rules in the designated area in front of the Thali building, and in March 2019, at Parking Commission Chair Keith Richey’s urging, the Police Commission returned it to regular parking.

Miltenberg said during the Commission’s meeting last week that the loading zone located in front of greenology is “need” but that “unfortunately trucks don’t utilize it because there’s always cars there.”

“That’s the problem,” she said. “I will tell you that if we [parking enforcement officers] see somebody in the car, we will ask them to move. It’s not like they stand out there [and] wait for somebody to park. If there’s nobody in the car, they will give them a few minutes to get back out. But we just can’t let the car sit there.”

Marks said greenology does about 30 to 50 transactions from 8 to 11 a.m. and that the number would rise “if we had parking.” He said it’s “really difficult” for delivery service drivers to afford parking tickets.

“I’ve reached into the cash register and paid for their tickets because  they can’t afford that $30 ticket,” he said. “I mean basically I am selling a $33 cup of coffee. Three bucks for the coffee. Thirty bucks for the ticket. It’s tough. The restaurant is doing pretty well but I need this breakfast and coffee business to work for it to stay viable.”

“Unlike James, my customers actually walk back in and cancel their memberships,” she said of ticketed motorists. “So I see them live. Parking is a huge issue down there for us, so even those few hours is six of my customers if they come in for a half-hour appointment. And those are popular time slots that people are only going to continue to choose if they can park and get to their appointment on time. When you charge for a 25-minute appointment if they can’t find a parking spot and end up taking seven minutes of the 25-minute appointment, it’s not a sustainable business for me to continue to have our clients and they are not able to find parking, so they just go elsewhere. We have competition in the area that’s close enough so that they can just go someplace else.”

DiFederico said the town should be “very careful about moving loading zones and changing parking based on what business it may be in front of.”

“I think that’s sort of a fool’s errand—if we start doing that in six months, there could be a different business there that doesn’t open until 11 a.m.,” he said. “That has been a loading zone for a long time, as long as I can remember. It is the most effective spot because it is the widest area. It does allow for trucks to pull in and out.”

DiFederico reviewed some of the history of why public safety concerns ruled out others streets in the area having loading zones installed.

“We can’t go to these trucks, delivery truck drivers and say you can’t park here, and then not provide them a loading zone,” he said. “And we move the loading zone somewhere else, we just are moving that problem in front of another business. And while I do sympathize with Mr. Marks, perhaps some of the solution has to come from him as far as maybe some curbside pickup that would alleviate some things, educate his customers. When GrubHub pulls up, do some curbside pickup with them and also there are three-four spots in front of his store but at 7 a.m. it’s not that difficult to find a parking spot downtown. So there isn’t as if there is no parking down there, it’s just those spots right in front of his store is a loading zone but there certainly is ample parking in downtown on-street parking at that hour, so it’s just a matter of maybe training his customer base a little bit better.”

Hofflich said it’s only recently that the commercial space on the corner—associated for years with the “Wire Whisk” store—was converted to accommodate food providers. Saying that modern delivery trucks often are smaller-size Amazon vehicles, Hofflich asked whether the loading zone itself could be made smaller. He echoed Marks in noting that immediately after the loading zone there’s a fire hydrant and disabled parking space, stretching the effective no-parking area for customers even longer.

“Perhaps the handicapped space could be moved further down the street and not as close to the loading zone space,” Hofflich said. “I know that we still need handicapped spaces, I use them myself, but to have it so close to a no-parking zone, you’ve got a whole area where people just cannot park.”

At one point in the meeting, Marks asserted that there were “probably two spaces” left beyond the disabled space before the Fire Department. DiFederico said a quick look at Google Maps showed it was actually eight to 10 spots. To the suggestion that the loading zone be pushed closer to the corner of Main and East, DiFederico noted that there’s a state-mandated rule that there must be no parking within 25 feet of a designated pedestrian crosswalk, and that there are two crosswalks at the corner.

“So if we have to adhere to the 25-foot rule, that is going to consume most of that loading zone anyway, so we have to be careful what we wish for here,” he said.

McLaughlin said he agreed that more information was needed in order to make a decision.