New Canaan Police at about 4:25 p.m. Monday received a report of a larceny at 16 South Ave., according to a call log. That’s the street address of the Mobil gas station. Asked about the incident, police said it involves a juvenile and is being worked out between the business owner and family.

A Stamford-based company, Case Study Brands, on Thursday presented a plan for Waveny House to the Board of Selectmen during a regular meeting. The company provided a broad sketch whereby Waveny gets a “luxury brand reflective of both its heritage and crown jewel positioning with the community,” with a new website and promotional materials, larger events and a staff “house director” whose responsibilities would include “concierge services.” The current online information for Waveny House lives in the Recreation Department’s area of the municipal website and “doesn’t feel glamorous” for what a bride is looking for,” officials from the company said. “It’s a little bit lacking in the glamour” compared to competitors such as the Roger Sherman Inn and Philip Johnson Glass House, they said. (In introducing Case Study Brands, First Selectman Kevin Moynihan said the Stamford-based company was “from Greenwich.” “Do you call yourselves from Greenwich, I guess?” he said.)

Thursday of this week was New Canaan Health Director Jenn Eielson‘s 8th anniversary with the town.

A story on the ethics investigation regarding Moynihan appeared in The Advocate, a newspaper in Stamford.

Fire officials say a cause of the blaze that destroyed a barn on Silvermine Road early Monday has not yet been determined. No people or animals were injured in the fire, which appears to have started at the front of the barn, according to Fire Marshal Paul Payne. 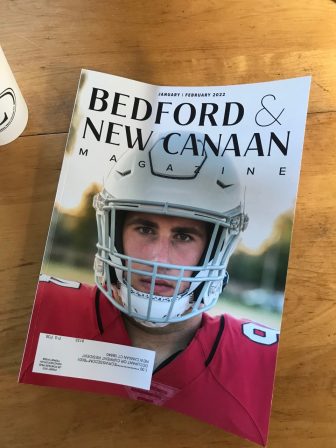 NCHS ’15 graduate Zach Allen is featured on the cover of the Bedford & New Canaan Magazine.

Animal Control Officer Allyson Halm is to retire at the end of this fiscal year, Police Chief Leon Krolikowski told members of the Board of Selectmen during a budget hearing Tuesday. Halm responded to 262 calls last year, including those involving wildlife as well as domestic animals. The town will plan to bring in a part-time Animal Control officer to succeed Halm in the role following a transition period, Krolikowski said.

Police at about 4:58 p.m. Monday received a report of a motor vehicle passing a stopped school bus in the area of 341 Weed St. 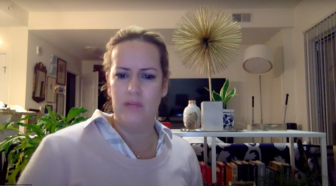 The Greenwich Wine and Food Festival is not coming to New Canaan as recently proposed because “we did not have the consecutive dates” that the organizers were seeking, Tucker Murphy, administrative officer for Moynihan, said during Thursday’s selectmen meeting. Days after members of the Parks & Recreation Commission voiced concerns about plans from the festival’s founders to bring a three-day event to Waveny, a member of the company behind the proposal emailed this news outlet under the subject line “Correction Needed.” Lisa Meipala Kennedy, editor in chief, senior vice president of a magazine called “Serendipity,” referred in her email to a part of the meeting (bookmarked here) where, in response to a question from Parks & Rec about why the festival isn’t staying in Greenwich, the CEO of the magazine’s publication company, Suni Unger, said, “We have a huge tie to Greenwich and we’re very happy there, but with the big changes of this event and making it so much smaller and more VIP, we thought it was a great time to find a new location, at least just for the fall.”

“Reading through some of the quotes and general information as its presented, there are some inaccuracies that I’d like to have you correct. In paragraph 12, the text implies that Greenwich Wine + Food is leaving Greenwich, we are not. We are planning and speaking with several towns, including Greenwich, to hold similar events. This is not something that would be moved. Instead, we are looking to add additional VIP events in towns like New Canaan, and Westport. Can you make the changes and let me know when they are live? Going forward, happy to put you in touch with our PR team ahead of future publications for any fact-checking purposes.”

NewCanaanite.com responded that after reviewing the meeting recording, no corrections are warranted. 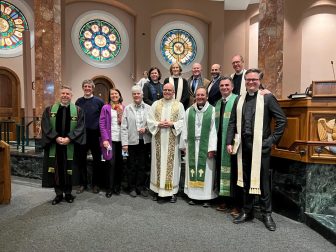 Congratulations to the Saxe Middle School student team named among 57 winning teams from around the nation in the NASA TechRise Student Challenge. In it, students build experiments that will autonomously operate and collect data from the edge of space aboard a suborbital rocket or a high-altitude balloon test flight. Nearly 600 teams applied to the most recent challenge. The Same team’s experiment will explore “The Effect of High Altitude on Color Perception.” Winning teams will each receive $1,500 to build their experiments and an assigned spot to test them on NASA-sponsored suborbital rocket flights operated by Blue Origin or UP Aerospace, or a high-altitude balloon flight from Raven Aerostar.

Police say a 2021 Mercedes G-Wagon was reported stolen from a Brinkerhoff Avenue around 1:15 p.m. on Jan. 21. It had been left unlocked overnight with the key fob inside, and second key to a different vehicle had been left in the Mercedes, police said. Using the SUV’s GPS system, police located the vehicle in Scarsdale, N.Y., though the Mercedes’s key fob wasn’t found.

Some upcoming events (please use our Community Calendar submission tool here and we’ll share your events): 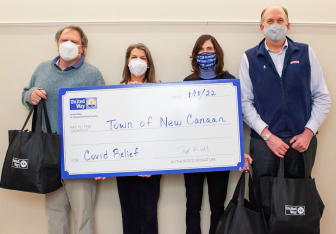 Finally, the United Way of Coastal Fairfield County awarded the town of New Canaan a $2,000 grant to support residents impacted by the COVID-19 pandemic, along with a supply of KN95 protective face masks. New Canaan Human Services Director Bethany Zaro said in a press release, “We are so grateful for this grant. It will be used to help stock our food pantry with non-perishable food items as well as products not covered by SNAP benefits such as diapers, toiletries and household cleaning products. The KN95 masks are very helpful, as we’ve seen an increase in requests from our senior citizens.”